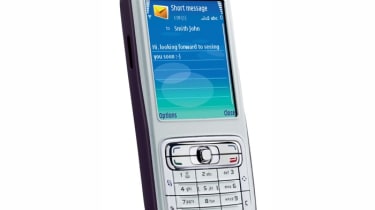 At first glance, you'd be hard pushed to recognise the N73 as a smartphone - it appears in the regular mobile phone candy bar shape that was popular a few years ago (the fashion world has decided that sliders are the way forward for low and mid range phones), but it hides a powerful secret. The camera is fantastic.

At 3.2 megapixles, the styling of the device has been built around making the camera the prime reason to choose this phone. With the obligatory Carl Zeiss optics that all the Nokia high end phones are sporting, it adds to this an adequate auto focus lens and a mechanical shutter to give the best picture from a Nokia yet. In many cases it surpasses the N93 but as with all camera phones, the relatively small area of the light sensor behind the lens means that low light performance is much worse than a standalone camera, although the built in LED flash does help.

In good conditions though, the N73 results would be easily publishable on the web, and scale well to print publishing, although I would like a way to sharpen the focus very slightly as I take them. Calling up the camera application is done with the spine buttons and there can be some problems here, because while two of the the three buttons (a rocker zoom and the shutter button) will only work when the camera is on (which happens automatically when the sliding cover is moved), the third button which calls up the Gallery/Viewer application can be hit at any time. Given the button sits just under your ring finger when holding the phone accidental presses easily happen.

Build quality on the N73 is adequate, there is a sense of 'plastic' when holding the phone and there's no real feeling of strength in the design. Luckily the keypad is very usable, with ridges along the top of each key to increase the tactile contact. Thanks to this, and a good positive feedback when you press a key, the N73 has the strongest numeric keypad of any Symbian phone on test here.

The application suite inside the N73 is pretty much standard - but as a multimedia phone the inclusion of support for Windows Media Player means that you can synchronise music from your PC as the N73 shows up as a digital audio capable device in the Microsoft application. Full PIM support is available (as with every Symbian phone here), and the addition of viewers for Microsoft Office documents and Adobe PDF files so you'll be able to read most email attachments.

One huge omission for the business user, there is no Wi-Fi, but the addition of Quad-band support means it truly is a phone that should work anywhere in the world. The N73 my be seen as the budget phone, but it is a good all rounder in terms of functionality, and your best choice if you are looking for something discreet.

Get Nokia N73 tips, user guides and downloads at Know Your Mobile

The smartphone in sheep's clothing, the N73 may look like a regular phone, but packs a powerful punch.