Instantly recognisable as something special 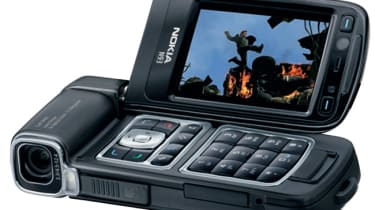 If nothing else, the N93 looks like a smartphone. Perhaps a bit too much like a smartphone, with it's 'Transformers' hinged screen that allows the device to act as a flip phone, a clamshell PDA and a handheld video camera. This makes the phone an almost perfect example of why people tend to avoid smartphones. It's big, has more functionality than anyone would need, and would take too long to do anything with.

Which isn't an entirely fair critique of the N93. As a Series 60 Symbian-based phone, it works in exactly the same way as the E61 and N73. It has the regular number-pad of keys with the function keys, cursor pad and call/hang up buttons exactly where they should be. The natural inclination is to use this phone as a flip phone, and it works perfectly well. It's when you flip the screen lengthways so it turns into a clamshell that the multimedia strength of the N93 becomes apparent.

The N93 is a great device for video content. The screen (QVGA again) is as clear as a Video iPod, and while it might not have the 60gb capacity, the micro SD cards will be great for carrying large media files from your PC around with you. One of the more practical features of the N93 is the TV out. Through a supplied pop-port attachment, you'll be able to hook the smartphone into any TV or Video that takes a composite (red/white/yellow pugs) cable and have the main display of the phone replicated on the big screen, allowing you to use it as the source for presentations and video demonstrations when hooked to a large display or projector.

Couple this with the video recording capability of the N93 and you have a phone that screams multimedia. Where the N73 will suffice for picture taking, if you have any inclination for recording video while on the move, the 30fps recording (at VGA resolution) is currently unparallel on any other smartphone (the N73 will cope with 15fps and a much smaller capture resolution). The results will not be as good as dedicated camcorder, but for capturing 'in the moment' shots and memories it is definitely suitable - you'll have this phone with you all the time, not something you can say about a camcorder.

In true camcorder mode, the keyboard section becomes a pistol grip, while the screen rotates to act as a large viewfinder. Under your thumb is the shutter button, and a circular toggle that controls the 3x optical zoom available (using Carl Zeiss optics again).

There's a satisfying clunk as you move the screen around through these modes, and there is no sense of weakness in construction. It can be a touch bulky, especially when opened and held up to your ear, but the advantage of this larger volume means the keys are not cramped, it's easy to reach all the buttons, and the cursor pad isn't limited in its movement. Some people will worry that when flipped open the screen and keyboard are just too far apart to be comfortable (and the centre of gravity makes it a bit unbalanced when opened) but the N93's size is in its favour.

Again, it's not an all rounder phone, the size will put off a lot of people, and the focus on media is perhaps a touch strong if you're looking for a day to day phone for communicating, but as a leisure phone it is unsurpassed. I wouldn't grab this for a business trip, but it would be the first phone in the bag when going away on a family holiday.

Instantly recognisable as something special, with three different physical modes it is geared more towards multimedia than any other phone on test.