A good smartphone that does one job really well 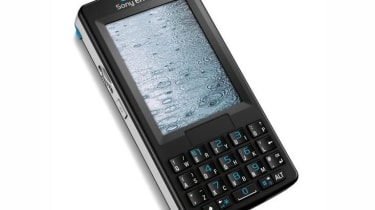 Where the P990i is the classic all-rounder, all things to all people device, the M600 represents a tight focus on messaging. There are subtle differences in the UIQ interface between the two devices - the M600 leans more to being used in one hand with a thumb touching the screen, rather than a pointer - but that doesn't change the fact that the messaging application in the M600 is essentially the same as that in the P990i. So why have two different devices?

Have a look at what's missing. First of all there is no Wi-Fi. This isn't as much of a problem as you'd expect given that most people on this device are going to be using a 3G or GPRS data plan to go online and pick up their emails. As in the P990i, there is Push Email support for the popular brands, and you can still check POP3 quickly with a few thumb presses.

Along with losing Wi-Fi support, the M600 lacks a camera, primarily for the same reasons the E61 lacks one. Most businesses (particularly those involved in sensitive research and development, or handling sensitive customer/supplier data are wary of devices with cameras and tend to ban them. So the lack of one is an advantage for the M600. It also means that much less space is required inside the case. The result is one of the slimmest, most stylish phones out there.

The size means a small Qwerty keyboard would be very cramped in terms of button size, so the solution here is to double up the buttons in a similar fashion to the BlackBerry Pearl device. Each key can be pressed on the left hand or right hand side - each one gives a deferent letter, so the first key gives 'q' to the left and 'w' to the right (giving us a Qw Er Ty Ui Op over the top row of five buttons). Technically it's a great solution - in practice it does take some time to be comfortable with it, and it is slower than a full Qwerty solution. But to balance that off the keys are easily rocked to either side, and the size of them means there's very little problems with hitting the wrong key. When switching to numbers, either directional press will suffice to dial a digit.

And where the P990i has two interfaces, the M600, although only having one style of interface, actually has two ways it can be used, one handed with your thumb hitting the large onscreen buttons, and another using the stylus in the traditional two handed way. There in a touch too much compromise for each mode to work to make the M600 an easy device to use - the lack of a direction pad (you have a scroll wheel and on-screen buttons) contributes to this - most people expect a d-pad on a high end phone.

The M600 is good smartphone, and it does one job really well - the compromises mean that most people looking for a good multi function device will be disappointed. Sony Ericsson is looking to capture both the BlackBerry user with this device and the fashion conscious user.

Equally at home on the catwalks of Milan to the Starbucks in the City of London, will keep you looking cool and in touch with everything in the office.