How to cheat your way to the top of Digg.com

Digg.com is a social media news aggregator and the doorway to hundreds of thousands of influential users and hence instant web popularity. But how do you get your content to the top of its rankings? 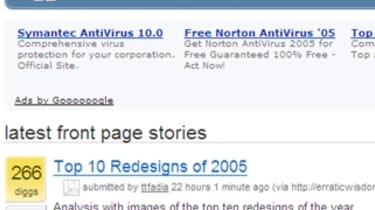 Digg.com is a content aggregation service based on user votes and submissions. You will have seen a link to it below each news story on IT PRO and everywhere else on the net, and it's the doorway to hundreds of thousands of influential users and hence instant web popularity.

If your story or page is picked up on Digg and it gets on the front page for any decent amount of time then you're "hot-stuff" in the technology and/or online publishing world, and more and more people will know about you and your products. Just like a high-ranking in Google, getting up to the top of Digg is important, and just like with Google there are ways to ease your way to the top of Digg. With Google you can use search engine optimisation, but with Digg it's more a case of luck, a good story, and a bit of a push.

How it works First it is important to see just how Digg works. If you look at the front page what you see is a list of news headlines, each linking to an outside story. Clicking the yellow Digg box for a story sends you to that story's comments page. Each story is submitted to Digg by a user. Other users then clicked "Digg this" to vote for the article, raising its profile and pushing it up the rankings.

When a certain number of users (usually about 40; but the number is slowly rising as the site grows) vote for (digg) the story, the system automatically moves it to the site's front page.

When a story hits the front page, it starts at the top of the page (and thus gets viewed more than any other story). The story slides down over the next few hours as new stories stack above it. Eventually it slips off the bottom of the page and onto page two (and so on).

Now this is the clever part, once you're on the front page you're pretty much guaranteed the longevity of the story. Because most Digg users are casual browsers, a story with a few dozen Diggs can earn thousands once it's on the front page, and because of that, you're almost assured a rank in the recently popular stories for the last day, week, month and year. However there are some pitfalls. Digg users can "bury" a story by marking it inaccurate, "lame," or several other pejoratives.

How to cheat The first thing to have is a story that's going to be a hit with geeks, Digg was a geek medium but it's changing, it started by just covering technology news. The site now includes categories such as world news, videos, and entertainment news as well. But the user base is mostly made of users who joined for the tech news, and what works for them is still going to be at least a bit tech related.

The story needs to have something that's not available elsewhere, and preferably it has to have that "future factor" that makes users think they're on the cutting edge, or that they're in on something that no one else knows about. It also helps to have a contentious story that's going to cause chat.

You have to have a story that's simple to read, that gets its facts up-front and doesn't use too much jargon - remember there are hundreds of thousands of casual non-tech users on Digg. Don't attempt to dress up mutton as lamb, the readership of Digg are not stupid. Once the story is on the front page it has to be interesting, ideally you're going for the power of the long-tail not the quick hit, but a quick-hit will work.

Once you post your story the next thing you need is "friends" on Digg to get the vital push to the front page. With version 3.0 of Digg the days of setting up 30 different fake users with 30 different Digg accounts are numbered, although as long as you logged on frequently enough and voted often enough you could still seed a story this way, but it requires a lot of work. However you can use different people in your organisation - but not too many - and users at home and anyone else in your contact book. The more they use Digg the better, and the more big stories they've pushed in the past the better. There's a good description of what Digg will and won't accept here and it's worth having a quick look at this before you attempt to get something on Digg.

What you can expect It really depends on the story and the popularity of digg on that day, a story might bring you a couple of thousand users per hour, or it might bring you much, much more, sites have seen an increase of 5-10,000 visitors per day and that will last for about five to seven days.

Ideally you want it to be on the front page when the US wakes up to get the maximum audience, so a front-page at the end of the day in the UK is ideal, unless you want a UK and European audience. In addition, Digg isn't so hot at the weekend so optimally you should try and get the pages up for the US Monday morning ie late Monday here. You'll probably also get some secondary hits from del.icio.us and other places which should prolong the effect to a week and possibly further.