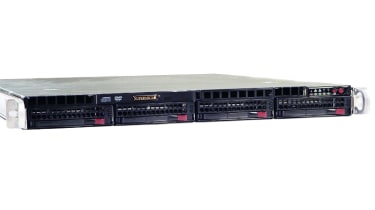 You might be interested in the Evo-X6015 for is its sheer memory capacity as the Supermicro motherboard has no less that sixteen DIMM slots supporting the latest fully buffered memory. This does seem excessive for a 1U rack server but the system is great value overall as as the price includes 2GB of 667MHz memory.

There's much more as you get a pair of speedy 2.33GHz 5140 dual core Xeons in the driving seat whilst the front panel has room for up to four hard disks with three occupied by 74GB SATA drives. The motherboard incorporates an Intel SATA controller chip which delivers plenty of RAID options as along with stripes and mirrors it supports RAID-10 and -5 and comes with its own Windows management utility. Note that support for the smaller 2.5in. hard disks is not available as although we're now seeing a concerted move to this from many vendors, Supermicro is one of very few yet to adopt this form factor.

Internally, everything is very neat and tidy with the 5160 processors mounted with large passive heatsinks. They're also covered in a solid plastic shroud which looks a lot more substantial than that used in the Supermicro system from Cad 2. Cooling is handled by a bank of four dual-rotor fans and we were pleasantly surprised to find the low noise levels were on a par with the Dell and HP servers - Supermicro servers are usually on the noisy side.

Expansion options are very limited as although the single riser card does offer one PCI-X slot this cannot be used as Rackservers.com has fitted a Supermicro intelligent management (SIM) board which has a header backplate with a dedicated Fast Ethernet management port. The card offers support for IPMI 2.0 but also incorporates a Raritan chip for KVM over IP. This can be accessed via the bundled IPMI View software but you'll have a much more rewarding experience if you point a web browser at the port as this offers a well designed interface where you can monitor the server, control power and set up virtual boot devices. Usefully, you also get full server remote control tools included - vendors such as HP will charge you extra as this is an optional feature on its iLO2 management chips.

We're not convinced the motherboard is the best choice for a rack chassis as its unlikely anyone could afford to populate all sixteen memory sockets and the bank does preclude the riser card from having a second expansion slot, Nevertheless, for the price, Rackservers.com is offering a reasonably well balanced system with a good specification.

Good design and management tools and the biggest memory expansion capacity of all but this does come at a price as expansion is limited.