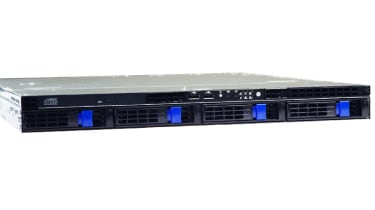 Traditionally, the majority of Tier 2 server vendors prefer to source their rack servers as complete solutions and here we see Mesh Computers turning to Tyan and its provocatively named Tank GT20 rack package. At barely 57cms deep it's one of the smaller systems on test but specification hasn't been a casualty as the GT20 delivers a very healthy dish of quality components.

First up is a pair of 3Ghz 5160 processors and these are partnered by a decent 2GB helping of 667MHz fully buffered memory. The storage picture looks sunny as well as the server has room for four 3.5in hard disks across the front and the price includes a triplet of high performance Seagate Cheetah 73GB 15K SAS hard disks in hot-swap carriers. As standard, the Tempest motherboard has an embedded six-port SATA controller but SAS support comes into play simply by adding Tyan's TARO M9000 RAID card into the dedicated SO-DIMM socket.

Based on an Adaptec AIC-9410W chipset this has four separate SAS/SATA ports plus a single four-port connector and although not the most elegant arrangement is simply wired though to the hard disk backplane. A neat idea but it is disappointing that Adaptec's HostRAID only supports stripes and mirrors.

Due to the reduced depth internal design is a little messy - particularly on the left side where a lot of cabling has had be tucked in out of the way. However, there are no obstructions to air flow in and around the critical components. The processors have large copper heatsinks fitted and the memory modules are located directly behind them. A row of four dual-rotor fans look after cooling for this area and are, unfortunately, very noisy.

There's no more room for expansion as although the riser card offers a single PCI-X slot it is occupied by Tyan's new SMDC (server management daughtercard). This increases the cable related clutter as it has to be wired through to the motherboard but it does bring some useful features into play as it incorporates an IPMI 2.0 compliant controller. Three software components are required and comprise the TSO (Tyan server operator) agent, manager and console. The manager acts as a go-between for the agent and console and the latter provides details on critical components and remote access to power settings. We found TSO works well enough although it's not as sophisticated as HP's iLO2 solution.

It's not the best designed interior and noise levels are high but Mesh does deliver a very good specification for the price which includes the fastest 5100 processors currently available.

Top processing power from a compact system with plenty of high performance storage although let down by messy internal design and high noise levels.