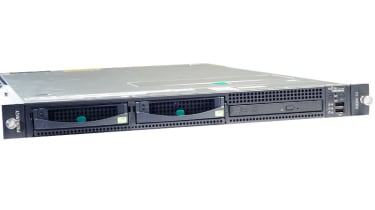 Fujitsu Siemens has been busy this year as it caught most of the blue chip competition napping by delivering one of the first Series 5100 servers to market. The RX200 S3 shows it hasn't been resting on its laurels either as it delivers a tasty specification with redundancy high on the agenda.

Initial server configuration is handled by the bundled ServerStart utility while ServerView looks after general management and provides an SNMP-based interface which can access all systems on the network that have the relevant agents installed. From here you can monitor areas such as processor temperatures, fans and expansion cards while failures will cause alarms to be generated. We would say that ServerView is as good as IBM's Director but not as slick as HP's System Insight Manager.

Initially, the storage picture looks bleak as the front panel design only supports a pair of 3.5in hard disks. This is fine if all you want is basic storage capacity with support for mirrored arrays but you can opt for a four bay 2.5in drive version if you want higher levels of redundancy. However, you must decide when you buy as the server can't be converted if you change your mind.

Under the lid the server exhibits a nice clean design with little to impede a smooth air flow through the chassis. For your money you get a pair of 2.33GHz Xeon 5140 processors which are endowed with the faster 1333MHz FSB. Each processor is topped off with a chunky copper heatsink whilst the bank of eight DIMM sockets are positioned to the side with two occupied by 1GB 667MHz fully buffered modules. Cooling is handled by a row of five dual-rotor fans and the processors are covered in a transparent plastic shroud to direct all air across them. Noise levels are higher than the NEC 120Rg-1 but a separate panel in the lid means the hot-plug fans can be replaced without pulling the server from the rack.

There are plenty of other fault tolerant features as the embedded Broadcom Gigabit Ethernet adapters can be teamed together using the supplied Advanced Control Suite for load balancing and failover. Power also gets a look in as the server came supplied with a pair of 650W hot-swap units. General expansion options look good as the riser card has PCI-X and PCI-e slots with the latter supporting a full length card.

Build quality and design have always been strong features of the PRIMERGY rack servers and the RX200 S3 is no exception. As with Dell, storage options are more limited but redundancy, expansion and management facilities are all up with the best.

A solidly built and well designed rack server with plenty of fault tolerance and management facilities although storage options are more limited.