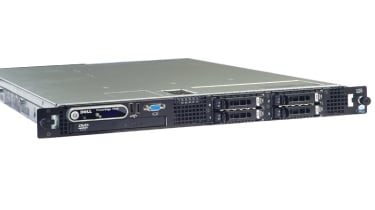 When Dell announced dual-core Xeon support earlier this year the 1950 was one of a huge raft of new servers introduced to its PowerEdge family. It's the smallest that supports the 5100 series processors and the review system came equipped with a pair of 2.66GHz 5150 modules with the faster 1333MHz FSB.

There's a lot going on at the front as you get Dell's distinctive LCD display panel and a DVD drive squeezed in underneath. Storage potential isn't as good as that offered by the Evesham's 1050AL but you still get room for a four drive cage that supports 2.5in. SAS or SATA drives. The cage has been positioned carefully to allow grills to be placed on either side for an unobstructed air flow through the chassis. If you're more interested in capacity then you can swap this for a different cage which supports a couple of 3.5in drives. Storage redundancy is good as the price includes Dell's PERC 5/i RAID card which comes with 256MB of PC2-3200 cache memory and a battery backup pack.

There's not much to see under the bonnet mainly due to the air shrouds covering all key components. With these out of the way you'll see the processors are topped off with large heatsinks and even bigger side vanes that those on the NEC server.

Cooling is handled admirably by a bank of dual-rotor hot-swap fans and we found operational noise levels to be amongst the lowest here. A couple of separate riser cards at the back of the chassis each offer a PCI-e 8X expansion slot and if you want the PCI-X versions these are easy enough to remove and swap out. It's worth noting that the dual Broadcom Gigabit adapters also have the hardware key installed which enables the embedded TOE (TCP offload engine).

You get Dell's OpenManage software suite bundled as standard which offers a good range of remote management facilities. The Server Administrator provides web based access to individual servers allowing you to gather data from the motherboard sensors and set up thresholds for alerting. The motherboard has an embedded IPMI 2.0 baseboard controller chip but we've never been impressed with Dell's rudimentary command line shell which only offers basic controls over power. Fortunately, the server comes with the optional DRAC 5 upgrade card which provides far superior remote web access to the server.

If a high storage capacity isn't a high priority then Dell's diminutive 1950 offers particularly good value with a strong focus on design and redundancy.

A super rack package from Dell with excellent design and a fine specification for the price which includes good management features.