Bill Gates heads to London for a low-profile UK leg of the Office and Vista launch roadshow. 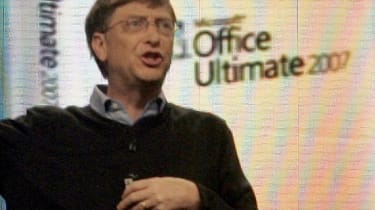 Microsoft has officially launched Office 2007 and Windows Vista in the UK, with a small event held at the British Library in Central London.

Chairman Bill Gates unveiled the two products in a keynote speech in which he spoke at length about the efforts that Microsoft went to in order to produce both the new operating system and the new version of its office productivity suite.

"Twenty four years ago when we launched the first version of Windows, people were sceptical about graphical user interfaces and what developers could do with it" said Gates.

"We have worked hard to build a new software platform and we are keen to see how people go ahead and use it. Over five million beta testers downloaded and tested both sets of products in one of the largest beta tests we have ever done" he added.

Microsoft has not launched a new version of Windows and Office at the same time since the introduction of Windows 95 and Office 95, which also marked the move to 32-bit computing and a 32-bit code base for both products.

Analysts are already predicting that over 100 million machines will be running both the new products within the next 12 months.

"The ease of use of Vista is amazing, it is easier to find your information with the new search feature, while Flip 3D offers improved navigation through your windows and applications" Gates said. Other user interface improvements include transparent windows, a new task bar for accessing and displaying small information applications called gadgets and the removal of the "Start" button, which has been replaced with a smaller Windows logo icon.

One area that Microsoft is keen to promote is security. Traditionally the weak point of any Microsoft operating system at launch, Windows, and its key components such as the Internet Explorer 7 web browser feature extensive new security counter measures to try and curb the growth of security attacks on the Windows platform. "We have taken significant steps to tackle malware, phishing and parental control" commented Gates.

"Office 2007 is a huge release, embracing XML which we first got behind 10 years ago" said Gates.

"The Ribbon takes a number of existing Office features and functions and brings them to the surface. It only takes a few hours to get used to the new interface - a gamble which has paid off for us" he added.

"The strength of Windows and Office lies in the ecosystem around it - the software and hardware partners, and the users" added Gates.

As well as several versions and applications for the business user, Microsoft is making a big deal of the consumer features of several variants of Vista.

"One of the strongest parts of the new Vista interface is that you are not tied to just a keyboard and mouse" said Windows marketing manager David Weeks, as he demonstrated the integrated Media Centre big-screen interface and infra red remote control support.

Windows is available in several versions - Home Basic, Home Premium, Business and Ultimate, as well ass several business-only versions made available to premium customers and Software Assurance subscribers. It is expected that most consumers and small business users will adopt the Ultimate edition, which includes all of the features of the other three editions as well as the consumer Media Centre capabilities.

Office is available in an astonishing eight versions - Basic, Standard, Home and Student, Small Business, Professional, Ultimate, Professional Plus and Enterprise. The various versions swap in and out applications outside the traditional Office suite including Groove, Accounting Express and Office Communicator.