IT has power to revolutionise education

Bill Gates and Gordon Brown champion the use of technology to empower individuals, particularly in education. 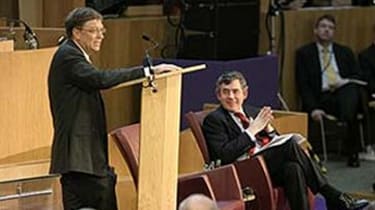 Fresh from the hubbub surrounding Vista's launch this week, Microsoft chairman Bill Gates took centre stage again in Scotland to outline his vision for the future of education, specifically the key role that technology will play.

Technology is very close to making exciting theoretical educational possibilities a reality, he told an audience of academic and government delegates at the Microsoft Government Leaders Forum in Edinburgh.

"I would claim that we are now on the verge of something where technology will make a difference," he said, suggesting that in the future an excellent university education, in the form of good lectures, incredible people and innovators, would not be reserved for the most popular institutions.

Instead, Gates said, many institutions will post their content and lectures on the web, free of charge, so that all students can benefit from and share in the experience.

"It's very fitting that we are here in Scotland," added Gates. "Of course we have the example of Carnegie, who was not just a great philanthropist but also believed in education and empowerment. His example of funding libraries has been a great example for Microsoft and my Foundation, as we have gone out to libraries around the world, and gone from just having books to now having PCs that connect up to the internet.

There is real demand for e-empowerment rather than simply e-engagement, according to 18-year-old Lenna Vrommans from the Netherlands.

In response Brown said: "The idea of decisions being made by people getting together in smoke-filled rooms, that's all over. People now know that there is a strong way to influence opinion by the likes of blogs, e-mails and petitions. People are recognising that they have more power but can that power be harnessed to change things for good? There's got to be a lot of that to come in political systems."

Brown also used the forum as an opportunity to echo Gates' passion about educational equality.

"Our ambition for education is to raise the floor and to remove the ceiling, a higher floor for all to build from, with no ceiling for anyone to be held back, no limits to potential, no cap on aspiration and no child left behind," he said.