The 8800 doesn't have the visceral desirability of the Pearl, but it's undoubtedly a more capable business device 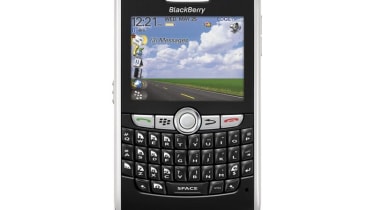 The Pearl made RIM's BlackBerry sleek and sexy enough for consumers, but failed to win over a large part of the hardcore email user community that still want a full QWERTY keyboard.

The BlackBerry 8800 is RIM's attempt to deliver that same sleek desirability to the wider business market - and wider is certainly the operative word. You get the same trackball as the Pearl, the same black and chrome gleam and the case is considerably more stylish than any other full size BlackBerry, the 8800 is still a much bigger device than a conventional mobile phone. Only part of that is due to the QWERTY keyboard though: the 8800 also contains an integrated GPS receiver.

Inflating the Pearl form factor to accommodate the keyboard also makes room for a QVGA 2.5 inch screen and the largest battery of any BlackBerry so far. The proportions aren't as sleek as the Pearl but the 8800 is actually thinner than the Pearl, which is already thinner than most feature phones. Compared to existing BlackBerry devices or to the chunky Palm Treo models the 8800 looks elegant. The screen is just as crisp, clear and colourful as the Pearl; it has the same ambient light sensor to conserve power and it copes better with reflections in direct sunlight.

The BlackBerry keyboard has been one of its strengths; BlackBerry users pride themselves on answering emails in full, without abbreviations and textspeak. A fraction narrower than previous QWERTY models, the 8800 squeezes the keys much closer together but the surface of each key is the same size, with a pronounced curve cut away to stop you catching the neighbouring keys as you type. The action of the keys is more positive and there's more travel; in fact we've used ultra portable laptops where the keys didn't press down this far. It is a change from previous models but one that most users will like.

The biggest operational change is switching from the side scroll and jog wheel to the central trackball and this is very natural; not just because you're already using the 8800 with both hands for typing, but because the applications work very naturally, whether you're pressing to select, scrolling through a menu or zooming in and out. Scrolling from side to side on web pages is very handy and the trackball is much more convenient for left handed users. The dedicated menu and cancel buttons on the front with the call and end buttons, the volume controls on one side and the programmable 'convenience' button on the side make for a more powerful interface but you can drive almost everything just by scrolling and clicking.

The mini USB port charges the 8800 as well as syncing it (once you install the correct driver) which gives you less to carry on a business trip, but with the 1400mAh battery you could take it away for a couple of days and use the phone and the GPS for a few hours a day as well as receiving and sending email all day long and still not need to charge it. If you're not making calls the standby time is an impressive 22 days. Partly that's RIM's data compression keeping the traffic down (emails are squeezed into 2K chunks), but it helps that this isn't a power-hungry 3G phone, just EDGE and GPRS.

With the cost of data roaming, the limited number of places you get an HSDPA connection and the severe drop in battery life you see on many networks, at this stage it's probably the right choice for RIM to make. Contrary to some rumours, the BlackBerry 8800 doesn't have Wi-Fi, but it does have Bluetooth as well as GPS. The BlackBerry Maps application gives you directions, but you have to wait for maps to download - slow on EDGE and even slower on GPRS. You can get a map for an address in the address book but for postcode navigation or points of interest you'll want an alternative navigation package like the new CoPilot Live for Blackberry to get the most from having a GPS receiver built-in.

For years RIM refused to add a camera or memory card slot to the BlackBerry range, claiming businesses value the security of a closed device. While the 8800 faithfully drops the inadequate camera of the Pearl, it does feature a micro SD slot that can be disabled, stopping users copying data to it over USB from a PC or forcing the level of encryption if you do allow data to be stored on it. The memory slot is hidden under the battery cover though unlike the Pearl you don't have to take the battery out to change cards.

The 8800 is still a large phone to hold up to your ear, though that's no problem if you're using it with a Bluetooth headset, or as a speakerphone. The audio quality is excellent, for calls and for playing music. The voice calling works well; the 'convenience' button is assigned to this by default so you can turn it on without looking at the screen and spoken prompts make sure you're getting the number you want. Sending voice notes it a little less successful; it's very convenient to record and send a message instead of typing a text but until the mobile operators make it easier to receive an MMS from another network what arrives is usually a link to a web site rather than an audio file.

As well as business-oriented multimedia, the 8800 has the Pearl's multimedia player for music, video and pictures.

If your company hasn't invested in a BlackBerry Enterprise Server (BES), you'll be using the BlackBerry Internet Service for email and the Intellisync-based BlackBerry Desktop Manager for everything else. This has improved from earlier versions but is still a little ponderous. You can sync over Bluetooth or USB, but it's still a step behind the full over-the-air sync of BES - or Exchange with Windows Mobile devices.

GPS, micro SD storage and a stylish case are only new to full-size BlackBerry devices; there are plenty of smartphones on the market offering at least two out of three. Windows Mobile and other push email solutions that don't require the investment of BES are gaining ground and there's no HTML email or built-in document editing in the BlackBerry OS. But BlackBerry is still a strong business tool and the 8800 is the best business Blackberry as well as the most stylish.

Somehow the 8800 doesn't have the visceral desirability of the Pearl and it doesn't have WiFi or 3G. But with GPS and a QWERTY keyboard it's undoubtedly a more capable business device, especially if you want a BlackBerry with a full keyboard.