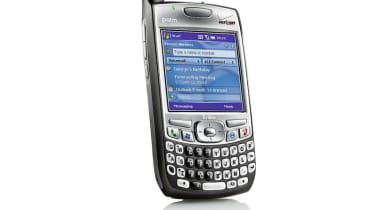 In 1998, Microsoft launched the Palm Powered PC - a direct competitor to the nascent Palm Pilots. 2006 saw the release of the first Palm device not to run PalmOS... under the hood of the Treo 750v is the Windows Mobile Operating System.

So how do you compare the Treo 750v? First of all, the look and feel of the hardware is pretty much identical to the Treo 680, you have your thumb type QWERTY keypad at the base of the device, the functions in the middle, and the touch screen at the top.

In terms of software, what we have is the Pocket PC version of Windows Mobile; essentially the same as the HTC 4350 we've also looked at in this series, and this highlights the major difference the 750v unit has compared to the comparable Windows Mobile devices, the screen. The 750v's screen is only 240x240 pixels. Comparing this to the 320x240 screen of the P3450, with its option for portrait or landscape orientation, and the 750v comes of second best. Application screens feel more cramped, there's less information on the screen, and it all seems a little forced into the device, rather than feeling natural.

Palm has always been known for making a great user interface that is simple and easy to understand, irrespective of the underlying problems of the geriatric operating system. While switching to Windows Mobile means that multi-tasking is possible, using the internet while on the move is viable, and all the hooks and code are present to allow integration to MS Exchange, Palm has sacrificed one of its key market differentiators for this power.

Palm has tweaked and altered where it can, such as the reworked 'Today' home screen making it easier to dial numbers (and, a first for Windows Mobile, dial directly from the Today screen), and it has replaced the built in SMS and MMS software with its own application, bringing threaded browsing to SMS - something the PalmOS-based Treo has long had, but a first for Windows Mobile.

Yet Windows Mobile still shines through with little alteration once you enter the bulk of the applications. You'll be synchronising this phone through Microsoft software, and it is geared heavily towards Outlook and Exchange. You'll be using the pocket version of Word and Excel. You'll be using an interface that is familiar to users of Windows devices, not Palm devices.

Ultimately, the 750v is caught painfully between two rival houses, and that can never be a good thing. If you want the simplicity of a Palm device, then look at the Treo 680. If you want Windows Mobile, then go for a design that was intended for the operating system. It's hard to think of a real world scenario (outside the die-hard Palm or Windows fans) where the 750v would be superior to either of its close cousins.

The 750v is caught painfully between two rival houses, and that can never be a good thing. If you want the simplicity of a Palm device, then look at the Treo 680. If you want Windows Mobile, then go for a design that was intended for the operating system.