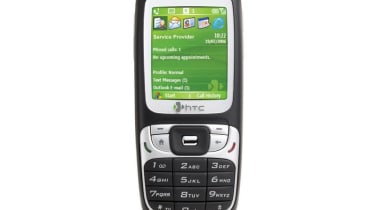 People joke that Microsoft always takes three or four goes to get a product working, and the smartphone market has been no different.

Lacking a major name (such as Nokia or Sony Ericsson) means that Redmond has used a mix of smaller handset manufacturers such as the High Tech Computing company, commonly known as HTC, which not only make their own branded MS Mobile products, but will white label the devices - this leads to a single phone being available under a variety of names such as Oxygen or the Orange SPV C100. It's still the HTC S310 though.

And the 310's Operating System is an interesting design study. While it runs Windows Mobile, it has a radically different look and feel to the P4350. At every design decision, HTC seem to have decided that this smartphone would be more phone than anything else. The small physical design bears this out. This is a phone that could easily be mistaken for a 'dumb' phone that you'd pick up for an elderly relative on a pay as you go contract. There's no touch-screen, no flips, or twisting parts, no off-putting QWERTY keyboards, it is simply a phone.

This simplicity continues into the user interface, which consists of a home screen, and extra programs displayed nine at a time on subsequent screens you can step through with a single button press. There is no complicated folder structure; each screen is designed to act in exactly the same way, providing a consistent user experience.

In a sense this makes for a much more focussed experience, but one geared more towards someone not wanting an all singing all dancing phone. Which might be great if you need to have someone who's only just come around to the idea of carrying a phone, but won't even touch a laptop when they are out of the office; but the philosophy of making a smartphone as much like a phone as possible means that the 310 simply does not have enough flexibility to be considered as a portable computer, even though you only have T9 when entering information, replying to mails and managing your Outlook synchronised calendar and contacts.

What it does do is act as a great reader. By that you can browse the web and pick up email. You have built in document viewers to let you glance over any Word, Excel, PowerPoint or PDF documents that have been mailed to you. There's no Wi-Fi on the 310, and just like the 4350, there's no 3G support either, although quad band GSM and EDGE mean that you can still stay connected with the 310.

While the 310 won't win any prizes for features, it is cheap enough to enable you to outfit a large department with mobile email at a low cost, and for that reason alone it's worth looking at. But if you had to choose a phone to rely on when you were free from your desk, the 310 wouldn't be it.

While the 310 won't win any prizes for features, it is cheap enough to enable you to outfit a large department with mobile email at a low cost, and for that reason alone it's worth looking at.