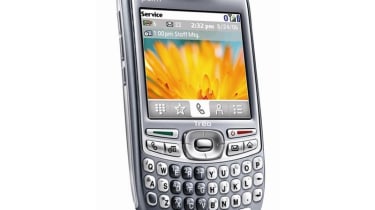 Ask any American what they think a smartphone is, and they'll more than likely point out to either a BlackBerry or a Palm device. Once the king of the Personal Digital Assistant manufacturers, Palm has struggled to adapt to the different requirements of the smartphone world. Partly this is due to the myriad of corporate changes behind the scenes, which has meant that PalmOS is not as flexible as others.

PalmOS devices have a clear problem of only being able to run one application at a time... as the user switches between applications, data is saved to the disc, and the data for the next application is called up. To the user, it appears to be a multi-tasking computer, when in fact it's all smoke and mirrors. It worked for the early palm models, but now it causes more problems as it solves.

If you are browsing the web on the Treo 680, and fancy checking your email, then when you run the email client, the Treo will first of all exit the web browser (dropping the internet connection), opening the email client, and then re-establishing the internet connection to poll the mailbox. And it's a right royal pain in the neck having to wait up to thirty seconds for that connection to be re-established. So much of communication nowadays requires you to be always connected, from a constant need to check emails, to a presence on an instant messaging system. It is clear, in comparison to the other devices on test here, that any PalmOS-based smartphone is not suitable as a communications platform.

While other operating systems grew and accommodated new features and demand from the user, Palm OS is stuck in a little time warp. It is still impossible to have a contact with two address details (eg one for work and one for business). Given that the tweaks Palm has applied to the device to allow the 680 to be effectively used by one-hand, and the ease of use of the applications to a new user, the Treo 680 is, ultimately, a disappointing smartphone for the business user. Palm may have a long legacy of devices, and a large range of third party software, but the core features on the device, and the underlying dated operating system, means it is very hard to recommend the 680 in a business environment.

Given that the tweaks Palm have done to allow the 680 to be effectively used by one-hand, and the ease of use of the applications to a new user, the Treo 680 is, ultimately, a disappointing smartphone for the business user.