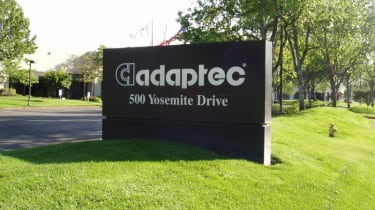 Adaptec has refreshed all of its Serial Attach SCSI (SAS) and Serial ATA (SATA) controllers to support PCI Express. The new range of controllers will support both internal and external connections. For those controllers without an external port, there will be adapters that will take a port from the card and expose it at the back of the computer.

The controller market has always had to support multiple standards but Juergen Frick, product marketing manager at Adaptec says: "This new family will support both SAS and SATA drives from controller. We are seeing a lot of people talk about mixed environments so we have decided to deliver controllers that can support both standards. SATA is the market leader in disk connections today but there are a lot of applications that require faster, enterprise drives such as SAS. This is why we have introduced these new cards."

As well as supporting multiple disk standards, Adaptec is also claiming that its new cards can cope with the problems of very large drive arrays. Frick told us: "The amount of time taken to rebuild disk arrays is getting longer. RAID 6 has been promoted as a solution but not in the right way. Most vendors talk about it protecting against multiple failures where we see it as being more about helping to rebuild the RAID array when something has gone wrong."

"The problem with large RAID 5 arrays is that a rebuild needs to touch every sector on the disks. This takes a lot of time and if a single disk has a problem with just one sector then the rebuild will fail. RAID 6 speeds up this process because the data can be reconstructed from the remaining drives. We have also added DDR2 memory onto our cards and when an array needs to be rebuilt, we no longer offload any of the work onto the main processor and system memory. This gives us a significant speed advantage over our competitors."