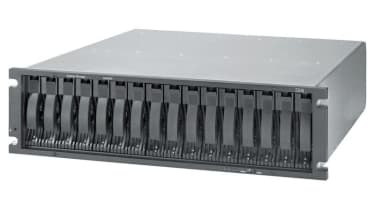 IBM's latest entry-level DS4200 Express focuses on medium sized businesses looking for a near-line storage solution that delivers high performance but also has a keen eye on value. Consequently, on the one hand you have an array that provides a quad of 4Gbps FC ports and on the other hand only supports SATA hard disks.

The latter is proving to be a top choice for these types of applications as SATA delivers the best combination of value, performance and capacity with the latest models already offering 750GB with 1TB on the horizon.

The DS4200 exhibits the classic build quality we'd expect from IBM and the 3U high chassis supports sixteen hot-swap SATA hard disks. The review system was supplied with a sextuplet of 500GB drives but with 750GB models on the case you're looking at a top capacity of 12TB. The drives supplied by IBM are referred to by it as EV-DDMs (enhanced value - disk drive models) but the only thing IBM claims is that they support standard SATA/3Gbps speeds making them suitable for 4Gbps FC operations.

There's room to grow as the chassis supports the new EXP420 expansion unit which provides a further sixteen drive bays. These connect over FC and the DS4200 can support up to six units which equates to some serious capacity as with 500GB drives this comes to a whopping 56TB. They also support IBM's Dynamic Capacity Expansion so you can add more EXP420 arrays as demand increases but without powering down.

The DS4200 offers plenty of fault tolerance as it comes as standard with two hot-swap power supplies and two separate RAID controllers. The latter have a pair of FC ports for the expansion units and another pair for attaching to FC hosts or switches. They are implemented as mini-GBICs so you can just pick the SFPs you want and go for 2Gbps or 4Gbps operations. Dual network ports on each controller allow you to have redundant management links as well. Furthermore, along with managing the array over Ethernet you can also access it from a connected host over FC instead.

IBM wants installation to be as smooth as silk and includes a disk with tutorials on fibre channel concepts, how the array works, differences between physical and logical drives and so on. It starts with a questionnaire to determine your level of knowledge and tailors the tutorial accordingly. You even get a quiz at the end to see whether you're fit to handle the DS4200 and all of its intricacies. Yes, many will see it as condescending but you don't have to use it.

If you dive straight in you'll find IBM's Storage Manager Client (SMC) software makes light work of installation. It searches the network for storage arrays, displays them ready for configuration and offers a pile of wizards covering every eventuality. You can start array creation immediately by selecting the drives to be included, the array type and LUN assignation. The controllers support the usual RAID-0, -1, -5 and -10 but note that support for RAID-6 dual redundancy is not on the menu. Nevertheless, the DS4200 supports multiple arrays so you can mix and match as required and each is assigned a preferred controller. Access security is good as you assign selected hosts to each virtual volume and the SMC displays a list of all hosts connected to the controllers.

As demand increases you can add new drives to an existing array as required and call up the on-line capacity expansion feature to increase the size of logical volumes. Even better is the fact that after creating a RAID array you can change your mind as IBM's dynamic RAID expansion feature allows you to select an existing array and change it on the fly. We tested this by moving from a mirror to a RAID -5 array and although we found general performance took a hit during the rebuild, the data remained available to our hosts during the entire process. Another useful feature is the option to dynamically alter the array's segment size allowing you to tweak performance on the fly.

The DS4200 offers a number of optional data protection features with FlashCopy at the top of the list. It's similar to the more common snapshot technology and takes point in time copies of selected volumes. VolumeCopy provides a replication service where it creates a duplicate of one volume to another location within the same appliance. Note that during the copy phase it will set the source volume to read only until it has completed.

For testing we called up a pair of Supermicro dual 3GHz Xeon 5160 pedestal servers running Windows Server 2003 R2 and equipped with LSI Logic 7104XP-LC 4Gbps FC HBAs. Physical connection is really easy although have a care when direct attaching host servers as we inadvertently connected one of our hosts to the EXP420 FC expansion port on the array and couldn't figure out why the Windows Disk Administrator could see six individual drives. Moving the server over to the host FC ports revealed the correct logical drives.

The six physical drives were split up into two separate triple-drive RAID-0 stripes and we assigned one to each host. We configured the freely available Iometer with four workers, 64KB transfer requests and 100 per cent read operations and saw one server report no less than 381MB/sec - near wire-speed for 4Gbps FC. The DS420 didn't wilt under pressure either as running Iometer on the second server saw a cumulative read rate of no less than 756MB/sec.

One of the biggest issues with fibre channel SANs is the high price some products command but IBM bucks the trend by delivering a 4Gbps enabled disk array at a competitive price. It offers a lot more as initial installation and configuration have been handled extremely well, performance over 4Gbps FC is particularly good and storage expansion potential is outstanding.