7u, 10 blade solution announced at CeBIT puts blades into the reach of smaller businesses and branch offices, as well as large data centres. 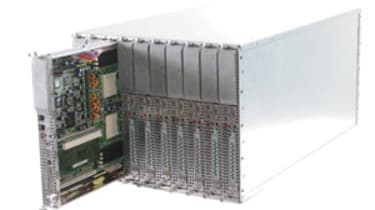 Blade servers have been heavily marketed at the enterprise on the promises of reduced space, fewer cables and increased flexibility that has resonated well inside the data centre. Even vendors such as Dell and Transtec have been targeting the enterprise market with their own blade offerings.

Now the market is changing. Supermicro, best known for its motherboards and barebones systems has joined the blade market. The company's first offering is a 7u, 10 blade solution. This puts Supermicro right up against the established blade server vendors such as HP, IBM and Fujitsu Siemens, and suggests that it is going after the corporate and the SME/Branch offices.

Each of the blade servers is full height and it has announced single, dual and quad socket blades running dual and quad cores and support for both Intel and AMD. At the back is an option to use up to four power supplies although initially they will come with two.

There are two disk bays inside each blade server and Supermicro is providing support for both 2.5 and 3.5 inch drives running across either SAS or SATA. There is also support for using Flash Cards as boot devices. Where a controlled appliance is required and there is no need for hard disks, this is a useful alternative and has the added benefit of reducing heat and power consumption. Supermicro has not yet talked about the use of Solid State Disks but with prices due to fall heavily over the next year and with IBM set to announce its first blade server, it is likely that Supermicro will follow suite.

Blade management is a major issue for the data centre. Each of the blade servers has an IMPI 2.0 management module connector and Supermicro will be shipping its own management solution with the server.

Network connectivity is through its own switch module although connections can also be configured to be simple pass-through. The first switch is a 10 port 1GB/s copper solution with a 10GB/s alternative due soon.

For connecting multiple blade enclosure and for high speed connectivity there is an optional Infiniband switch. This will link to each of the blade servers that can be fitted with their own Infiniband card.

Infiniband is a key technology for Supermicro as one of its target markets is High Performance Clustering and the company has already certified the solution for use with Microsoft's HPC software. Clustering can done between the blades and between multiple enclosures although no-one would say how many enclosures they had so far managed to link together.

SuperMicro doesn't see blade technology as being just server related and is expecting to release a series of Blade Workstations over the coming months.