Production growth and falling prices, along with a plethora of new device makers have narrowed the gap between flash and traditional hard disk to the point of converging. 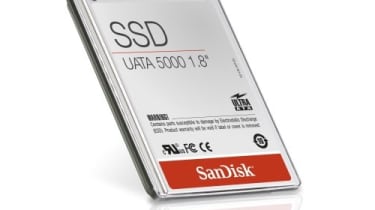 Flash memory has been explosive over the last few years, now it is beginning to reach the point where it can be seen as a serious competitor to traditional hard disk technology, or so claims SanDisk and Super Talent.

At the CeBIT technology show in Hanover, Super Talent demonstrated Solid State Drives (SSD) using IDE and SATA interfaces with capacities as high as 128GB and using both 1.8 inch and 2.5 inch form factors. The primary wholesale market for these devices is system builders, with medical, automotive and military the main end users. "For the medical industry the main advantage is robustness" says Super Talent's Billy Chaing. "They are constantly moving machines around in the emergency department and traditional hard disks have an average life of around six months in these conditions. SSD can easily last up to two years as it has no moving parts."

Chaing believes that it is this stability that also appeals to the military and automotive markets, but don't expect them to appear in your car yet. "The current price is at a real premium but they are falling several times per year" says Chaing. "You will start to see them in high end luxury cars over the next few years but not in mass market."

The same price issue is likely to keep them out of the laptop market although there are specific applications where Chaing expects them to appear. "Emergency vehicles are where we see SSD being used. These crews have to carry a lot of information and SSD is robust enough to cope with the environment."

When questioned about mainstream use of the technology Chaing was less upbeat. "The cost means we won't see SSD in mainstream laptops for 3-4 years although there are some users who will be happy to pay the premium for SSD technology".

So what is that premium at the moment? Existing SRP for a 16GB SSD in a laptop will set you back between $400 and $500. "That price will fall as SSD production begins to increase. At the moment, the IT industry is beginning to look seriously at how it can use SSD and is demanding 32GB drives" says Chaing. "Another factor that will drive that down is as other vendors begin to enter this market."

Chaing is not the only one who sees price being an inhibitor. Lance Carpenter at SanDisk agrees with Chaing that it is mainly price that is keeping SSD out of mainstream computing. Carpenter sees prices falling much faster. "In January at CES, 1.8 inch SSD was being talked about as a US$600 premium for laptop users. Within three months the OEM price has already fallen to US$350 and will continue to fall."

One of the things that will be needed to make SSD mainstream is storage size. While Super Talent is showing 128GB drives, SanDisk is talking about being able to produce 1TB drives in both 2.5 and 3.5 inch formats. This would clearly put SSD head to head with the mainstream drive manufacturers especially where mobility is concerned.

SanDisk obtained its SSD technology through the acquisition of M-Systems last year and is much more aggressive than Super Talent as to why it believes SSD will be adopted by mainstream manufacturers. Although it wouldn't name anyone, Carpenter says that SanDisk is expecting to see SSD enter consumer technology soon.

Carpenter says the "iNAND chips [the main building blocks of flash devices] are already shipping in both 4GB and 8GB sizes. By combining these chips, it is easy to create large storage devices such as 1GB SSD." These are the chips that are already being deployed inside consumer devices, such as mobile telephones, today.

"Speed and power are two reasons why OEMs like SSD" says Carpenter. "Fifty per cent less power which means a laptop that runs for four hours will gain around 28 minutes. Transfer times on our 2.5 inch SSD show a write speed of 45MB/sec and a read speed of 67MB/sec which is much faster than any traditional hard disk technology. The biggest gain is access time. When a computer first accesses a hard disk it generally takes around 17ms but we can access that same data in under 0.1ms."

These figures have yet to be confirmed by independent testing but for security appliances such as firewalls and email scanners these speeds mean that very high performance gains are possible. For database applications doing transactional data or scientific applications where large amounts of data needs to be access for massively parallel processing, complex disk systems could be replaced by SSD and show significant improvements.