Computer users have been furnished with yet another acronym, this time one that describes those who spend time idly surfing the web. 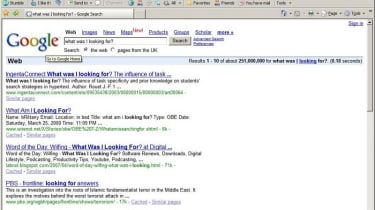 So you're reading IT PRO, and not aimlessly surfing the internet looking for... well, nothing in particular really. But admit it, that's what you'll probably do later. If not, then perhaps tomorrow while at work in between rattling off an e-mail and making sure your sandwiches are not wilting.

There's been a study, you see. One which claims that seven out of 10 of Britain's 34 million web users have fallen into the habit of 'wilfing', a new term which stands for What Was I Looking For and which, loosely translated, means idly sitting at your computer and merrily working your way through shopping sites, blogs, news sites and any other random pages you come across via search engines like Google.

As if to highlight this growing trend, I found out about wilfing while wilfing, ironically enough. I'd gone online to find out how my football team was getting on and ended up mindlessly clicking for 30 minutes or so, landing on the BBC website and seeing the headline, "Scots come tops for web 'Wilfing'" Thinking it was some bizarre wife-stealing phenomena via the internet north of the border (a combo of 'wife' and 'pilfering'), I clicked on it, discovered this new, made-up-by-PR-men term and continued with my very own wilfing session.

But not before I learned a few things. Apparently, web users spend, on average, two full working days each month being distracted by pages on the net, whether at home or at work.

And top of the sites visited by the 2,412 adults across the UK polled by YouGov were shopping, news and travel pages. The poll also suggested that even logging on for a specific purpose led many to be distracted. As for those Scots, well, 63 per cent of them admit to wilfing "all or some of the time."

While this sounds harmless enough - after all, how many of us spend many more hours vegetating in front of the television mindlessly absorbing the output from programmes ranging from Deal or No Deal to Wife Swap? - there were three nuggets of information which stood out.

One was that it could harm relationships; second was that women aimlessly surf less than men; and third was that adult entertainment websites are among the most distracting. That, it seems, sounds like a bit of a vicious circle: Surf the net, split with girlfriend, shrug it off and go back to the web for substitute 'entertainment.'

Suddenly, it doesn't sound too healthy.

A few issues ago IT PRO's sister title Micro Mart looked at the subject of internet addiction, and wilfing appears to be a part of that. We discussed then how China, for instance, is taking steps to curb web use.

Well, since that article was published the Chinese government has put a time limit on playing online games, with under-18s now restricted to no more than three consecutive hours each day. When they play beyond that time, a limit is imposed as to the amount of points they can score. This restriction comes on top of a ban on new cyber cafes and the setting up of military-style boot-camps aimed at pulling web-addicted children away from the net.

But do we in the UK need to enforce similar draconian measures? Unlikely. The theory remains, though, that those who do wilf often do it without even knowing. And that could be the most dangerous part of it all.

Curt Staker, president of web-filtering software developer Websense, believes it is ruining business productivity for a start. "Many employees have started to rely on the internet to complete their job duties as well as perform personal tasks during the work day," he said.

"In addition, with the sheer quantity and variety of websites and applications readily available, many employees are either not admitting to, or most likely not aware of, how much time they are really spending on personal surfing."

So what's the motivation behind wilfing? According to Cary Cooper, professor of psychology and health at Lancaster University, it is a mixture of boredom and wanting to avoid others.

"If people wilf at work, it could be they are bored with their job or that they work in a culture of such long hours that it is not the done thing to be seen to be leaving the office at 5pm," he said.

"At home, it can be a way of procrastinating or of not wanting to - or being unable to - engage with the family."

Warning that wilfing can become a problem, he added: "It can become addictive because it is interactive, fascinating and absorbing. It is not a passive activity like watching television, which feeds us, but an active one we are engaged in. It can give a sense of control to aspects of people's lives, where there may not be the same sense of control there once was."

Yet to stop wilfing requires an immense sense of willpower and discipline says Pete Cohen, GMTV's resident life coach and motivator. "Stopping yourself wilfing takes a mixture of planning and willpower," he said.

"These days there are all manner of websites vying for our attention. Internet users need to set themselves a specific surfing goal and time limit to keep on track."

With this in mind, I conducted a study. On myself. I powered up my Nintendo Wii, sat in front of the television, called up the console's web browser, and then flicked on to Sky One for The Simpsons.

I wanted to see just how long I would last before switching back to the Wii. The advertisements came on and my finger slipped.

The Opera browser was in front of me so I tapped in YouTube.com and then decided to have a Borat fest. A total of 50 minutes later, I was still calling up random videos, putting them into full screen mode and settling back to watch. By this point, my girlfriend was starting to stir from her book and it was time to switch off.

So what was it? Boredom? Well, it was an ad break and I had seen that particular episode of The Simpsons before. A need to turn attention away from friends and family? She was heavily into her reading. A chance to seize control of an otherwise out-of-control life? Kind of - I very rarely get the remote and the Wii Remote is so much more fun.

So what's the problem? Maybe it's just a symptom of modern life, a chance to relax while doing, seeing and buying as much as possible in the short amount of leisure time we claim to have.