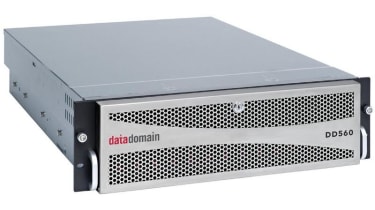 Tape will always have a place in any data protection strategy but today's rapidly shrinking windows of opportunity are prompting a consolidated move in the enterprise over to hard disk as the primary backup stage.

Consequently, there are a huge range of network storage solutions currently available but Data Domain stands out for a number of reasons. Whereas the majority of storage vendors focus on FC or IP SAN connectivity, Data Domain's appliances use the CIFS and NFS file sharing protocols. Essentially, they function as NAS appliances serving up shared storage to the network which is used for backup to disk operations.

However, there's much more to these products and in this exclusive review we take a closer look at the top of the range DD560. The appliance utilizes Data Domain's proprietary file system (DDFS) which is specifically designed to handle backup files. However, the really clever bit to these products is Data Domain's Global Compression (GC) technology. As data is sent to the appliance from backup servers it stores and analyses it in NVRAM memory looking for duplicate data.

We've seen a number of products on the market do similar things but GC is quite unique. Some work only on eliminating duplication at the file level by check-summing seed files in a vault and comparing them with subsequent backups. GC breaks the backup data stream into 4-12KByte variable segments and looks for repeating patterns. The segment sizes are variable as GC is looking for anchor points to break up the data stream cleanly. For example, it would be looking for spaces within a text file or Word document rather than breaking the file up into equal sized segments. Any unique data is then written to the appliance's hard disks using standard LZ compression. On subsequent backups only new data will be stored on the appliance and Data Domain reckons this system can reduce physical storage requirements by an average of 20X.

Installation is a swift affair and access security is maintained with a list of servers that are allowed to access the share. For the latter there's nothing to do as the appliance is automatically configured with one small share for logging activities and the rest presented as a single share for backup. The appliance will work with any backup software that supports network shares as a destination but it's worth taking time out to consider the best scenario. It's not a good idea to have multiple client agents being controlled by a single backup server as we found this acts as a bottleneck. We used a quartet of Supermicro servers running Windows Server 2003 R2 and employed a dual 3GHz Xeon 5160 system as a Symantec Backup Exec 11d media server with the remote agent utility installed on the other three servers.

We created four backup-to-disk folders on the appliance and whilst running simultaneous backups of each server we noted that the Gigabit port on the media server was reaching saturation point. To resolve this we created a second media server and separated them onto two subnets using both the appliance's Gigabit ports. We ran two backup jobs simultaneously on each media server to secure itself and one remote agent and saw significant improvements with Backup Exec reporting an average cumulative speed of 80MB/sec - around 281GB/hr. GC made its presence felt immediately as although we had backed up a total of 52GB, the management interface showed total used space of only 22.5GB. This will improve on every subsequent backup and after rerunning the jobs five times used storage space had only increased to 23.5GB and yet we had backed up the equivalent of over 300GB.

The appliance is designed to handle up to twenty simultaneous streams but we also found that our second test was giving it a good thrashing as the system status screen was showing the appliance's CPU utilization as above 90 per cent. However, disk based backup appliances always score higher than tape for data restoration performance and the DD560 is no exception. We restored a 35MB mixture of user files to one of the test servers and the job took barely four seconds to complete.

Compared with FC disk arrays, performance clearly isn't the DD560's strongest point but it does deliver a whole lot of other valuable features with redundant data elimination at the top of list. With 5TB of physical storage on offer the GC technology can effectively increase this to an average of 100TB - all in a 3U chassis. This makes it very cost-effective as it can significantly reduce the space and support services required in the data centre.