New research from scientists in Israel could pave way for integrating living material into memory chips. 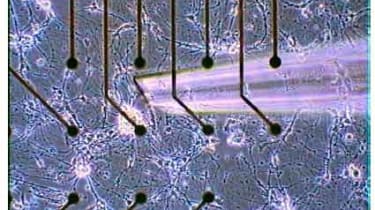 Israeli scientists have shown it is possible to store data on an artificial culture of live neurons. The ability to imprint rudimentary memories this way marks a step toward integrating living cells into memory chips.

Itay Baruchi and Eshel Ben-Jacob, of Tel-Aviv University, said that the breakthrough could help neurologists to understand how our brains learn and store information.

The researchers used electrodes to monitor the firing patterns in an array of linked neurons. Previous research has shown that the simple act of linking neurons together will cause them to spontaneously fire in coordinated patterns.

In a study published in the Physical Review E journal this month, the scientists found that they could make neurons create additional firing patterns to coexist with the original spontaneous ones. The scientists claimed that the new firing patterns represented simple memories stored within the man-made neuron network.

"We show that using local chemical stimulations it is possible to imprint persisting (days) multiple memories (collective modes of neuron firing) in the activity of cultured neural networks," the scientists said in the journal.

These new memories were created by adding very small amounts of chemical stimulants into the neuron culture at selected locations. The stimulant induced the neurons to start firing a new pattern in that location, which co-existed with the initial pattern.

Twenty-four hours later, the pair introduced stimulants in a new location and a third pattern started. This new pattern existed alongside the first two and all "memories" exists for over forty hours, the scientists said.