How Tesco uses sat nav to deliver your shopping 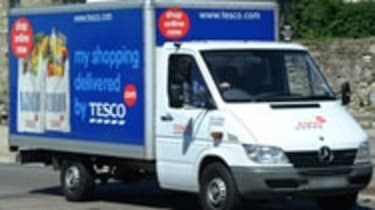 In-car sat nav technology is about more than replacing paper maps and local road knowledge, smart use and integration of the technology can also produce significant productivity gains for a business and its users.

One such example of this is supermarket chain Tesco and its online grocery shopping and delivery service. With several million registered customers, Tesco.com processes more than 4,000 orders an hour, generating sales of over 1 billion in its last financial year. Tesco.com delivery drivers cover most of the country, delivering groceries to customers within pre-defined delivery time windows, leaving little margin for error if drivers get lost or stuck in traffic.

While most of its delivery drivers serve fairly small catchment areas - typically, they delivered within a six to 10-mile radius of stores - and are able to rely on and develop their own knowledge of streets and locations of regular customers, the drivers operating out of the company's Croydon delivery store have to serve a much wider area, encompassing almost half of London.

The Croydon store is not your typical Tesco supermarket. While it looks, operates and is restocked like a conventional store, it is closed to the public and filled with trained pickers, the sole job of which is to pick and pack groceries for home delivery. The store is a departure from the past because, historically, pickers have fulfilled orders at Tesco stores close to the addresses of online customers. This store is more like a depot disguised as a conventional supermarket, but it is a formula that works and which fits in with Tesco's operational processes and supply chain system. It also allows the company to provide online delivery facilities to one of the most lucrative and demanding parts of the country.

However, servicing such a large delivery area can create problems for the drivers of the 78 delivery vans that operate out of the Croydon site. While very knowledgeable and capable, such a large delivery area demands London taxi driver knowledge which only comes through years of intensive training. In order to boost efficiency and productivity Tesco.com needed a solution to help its drivers plan their often long and complex routes while at the same time integrating the navigation software with existing applications and processes used for managing the delivery drivers and individual grocery deliveries.

Tesco opted for ALK's CoPilot Live software, using the Pocket PC version and installing it on the Pocket PC-based PDAs that the drivers already carry. The devices are used in place of many piece of paperwork and already have a docking station inside the cab of the delivery van.

"We already had a Pocket PC-based device set up in the cab of each van for capturing signatures, doing refunds and scheduling the order of their deliveries. The PDAs replace a mound of paperwork that the drivers would otherwise carry, so it made sense to make use of the existing hardware" said Jon Higgins, IT Director at Tesco.com.

There were also other operational and security considerations in using the existing PDA over a dedicated piece of hardware.

"The reasons we wanted to add a sat nav solution on to the Pocket PC device rather than add another device was that it added expense, especially if we went for a factory fitted sat nav solution, while a standalone unit raised security and theft issues if it were left unattended in the van while goods were being delivered" said Higgins.

As a rule, the drivers remove all the devices from the van such as the PDA and their phone to reduce the risk of theft, so even adding a removable dedicated unit would have posed issues as it would be yet another item to carry.

"In certain environments, in some parts of London for example where it may be necessary to park the van some distance from the actual delivery point, or where you are delivering to a tower block which will involve leaving the van for some time out of view, this would be more of a security risk than elsewhere, where you may be able to park right outside the front door of the delivery address. In keeping with police advice we would rather not leave these items on display while the van was unattended, else they run the risk of windows being smashed and items being taken" said Higgins.

Tesco.com wanted to fully integrate the CoPilot application into its other Pocket PC application - called Reach - to maximise efficiency and to minimise the amount of rekeying of information that went on. As the Pocket PC device already has the address data on it in Reach, Tesco wanted to pass that information into the CoPilot application and begin plotting a route, rather than asking the driver to spend time manually inputting the data into the sat nav software.

With the two applications talking to each others, when the driver arrives at a delivery address, the CoPilot application drops to the background and the data capture app come to the fore to capture the delivery signature, removing the need to keep switching between applications and transferring information manually.

"Integration took just 12 weeks and was a very straightforward process" said Higgins. "We needed just two people from our store systems team working on the project. They worked closely with ALK and thanks to the development tools available, we found it simple to integrate the CoPilot software with our existing Reach application."

Higgins added that since deploying the CoPilot software to its drivers at the Croydon store, the delivery team is now far more efficient as less time is lost as a result of wrong turns and being stuck in traffic.

"One of the more useful side features of having sat nav in the vans is the ability to reroute around traffic as needed".