IT PRO spoke to one of the founders of RIM about the success of BlackBerry, the next level of integration with enterprise systems, rivalry and co-operation with Microsoft - and the truth about the recent outage. 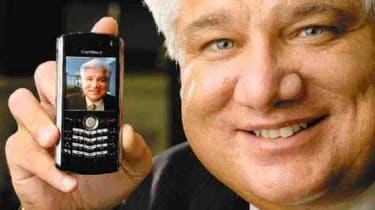 When he was 12, Mike Lazaridis won a prize from the local library for reading every science book on the shelves. He dropped out of university before he finished his engineering degree to co-found RIM but he's stayed an engineer at heart; he's donated millions of (Canadian) dollars to found institutes in theoretical physics and quantum computing and he hates the idea of letting marketing dumb down innovation to make products simple. We caught up with him at RIM's annual Wireless Enterprise Symposium to ask if the system failure had damaged RIM's reputation and what the next big thing after mobile email will be.

What can you say about the BlackBerry system failing in North America in April?

Our first priority was to get people up, and once we had people up and running we had to make sure the system was healthy so it wouldn't happen again - because once you open the floodgates and let everybody reconnect there's a lot of email to suddenly deal with. Remember, we didn't lose any data. The next thing was to work with the carriers so their networks didn't get flooded by the build-up of connections. Once we got there, we went to try and figure out the root cause. We'd kept a continuous log of what was going on, so we could do a post mortem later. When we figured out what root cause was we posted it.

It was maintenance that was done on the cache system for the file servers for the database, to improve the efficiency of the cache, and it should not have been done on both at the same time.

Did you make any changes to internal procedures as a result of the outage?

Unfortunately, we were all confused over what root cause was so we were going down the wrong way to recover the system. No one was expecting that this was the issue. It wasn't a hardware failure, it wasn't a software failure. It was an intentional interaction of the cache based on the maintenance.

How negative were the reactions you saw from customers and potential customers? Do they have concerns about reliability? Or did the outage show them how much their business relies on email?

A BlackBerry isn't the only device that can do push email now, or mobile applications. You're talking about connecting to the PABX as the next step for enterprise mobility; how does that fit in?

We talk about real-time computing and we've talked about corporate grade instant messaging. We know how successful instant messaging has been in the consumer space and what's really amazing is to see the power of instant messaging in the corporate space. It gets even more exciting as we start looking at the other two data stores. One of those is the back-end data stores - this is where all the critical information is that is the lifeblood of corporations, the information that makes the enterprise flow, operate and be successful. Things like SAP, Oracle, Siebel, IBM WebSphere, .NET, Java, web services and securely browsing the corporate intranet - these are all basic capabilities you can take advantage of by using the mobile data services and we have a lot of partners taking advantage of the connectivity that is inherent in the BlackBerry.

Is the company phone system is the next data store to use a BlackBerry with?

I think it's only natural as the industry goes to IP based PBXs and SIP interfaces this should become more and more common. It's just taken longer and been far more complicated than it looks. We discovered we needed a way to cross over the gap because there is so much TDM out there and that's where the Ascendant purchase comes in. That allows us to bridge the gap so we can work with TDM based PBXs, We can work with new SIP based PBXs - but in most cases we need to work with both. There's such an installed based and they work just fine but interfacing to them is the work of experience, and trial and error.

What do enterprises want to do with a BlackBerry connected to a PABX? Are they looking for unified messaging, cost savings or giving users a simpler interface to phone features?

The second thing is you can program it so it rings all the locations you are normally at, at the same time. Not in sequence; a lot of solutions are just call forwarding and you sit and wait and wait. If you're in your office both ring simultaneously - your desk phone and your BlackBerry - and whichever you pick up the other stops ringing. Which to me is natural - you have two phones, you pick one up, it stops.

Are there still new features that you can add to the BlackBerry Enterprise Server for what businesses are already doing with their devices?

Microsoft and Adobe are working on bringing platforms like Apollo and Flash and .NET to mobile phones. Do you think rich Internet applications are going to be important on mobile devices the way they are on the desktop?

Are you worried by the release of Windows Mobile 6?

We may compete in some ways with Windows Mobile but on the other hand, we support Windows Mobile, we always have, with BlackBerry Connect. The market is so big you can continue like this.

You've got eight million BlackBerry users now. Where will the next eight million come from - consumers, new markets or more users in existing customers?

Do you still see a lot of BlackBerry users carrying a mobile phone as well, or is it becoming more accepted as a phone too?

BlackBerry users do write longer emails and take more care about spelling and punctuation, don't they...