On the eve of the US launch of Apple's smartphone/MP3 player hybrid, the company touts slightly above-average talk and standby times in bid to woo power users put-off by sealed unit. 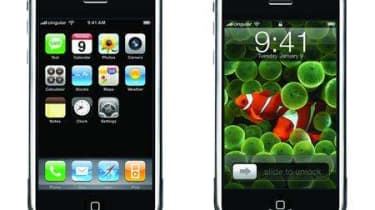 Apple's iPhone will have a longer lasting battery than originally expected, exceeding those in rival conventional phones, and on a par with data devices such as the BlackBerry, the company claimed.

Analysts said the company put to rest one of several concerns over the iPhone, which combines a music player and cell phone. It's due to hit stores 29 June. As a sealed unit, the user cannot simply discard and replace the battery once it begins to lose charge as they would with a conventional mobile phone or most smartphones. Just like an iPod, users will have to use an approved, or unapproved service centre to replace a failing battery.

Apple said it expects the iPhone to provide up to eight hours of mobile phone talk time, or six hours of data use. In January, the company said it expected the battery could last for as long as five hours of talk time.

Apple also said the top surface of the touch-screen phone will no longer be made of plastic; instead the company will use optical-quality glass, making it more resistant to scratches.

Mobile phone experts have questioned whether Apple's first phone, built off the success of its iPod music and video player, will live up to the industry hype ahead of its launch.

"It all depends what (consumers) use it for but I think it would make quite a bit of difference ... versus traditional smartphone talk times," Yankee Group analyst Lauren Cotes said, comparing the iPhone's eight hours of talk time to rival devices with four or five hours.

Shaw Wu of American Technology Research questioned if the phone would live up to its claims.

"We hope those times are accurate, but our sources have indicated iPhone's active use battery life may be closer to around four to five hours for heavy use, similar to other smart phones," Wu said in a note to clients. He did not name his source.

Smart phones like the iPhone also need lots of power as they also aim to handle internet browsing, personal data storage and music and video playback.

Apple said its battery claims are dependent upon specific configurations and "many other factors." It did not give further details on the longer battery life.

Sony Ericsson has touted a talk time of up to 9 hours for some of its Walkman music-playing phone models.

Apple said all told, the iPhone can support up to eight hours of talk time, seven hours of video playback or 24 hours of audio playback. The device also retains its charge while not in use for more than 10 days in standby mode.