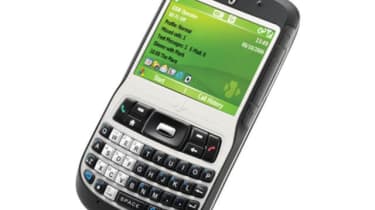 If you're doing email on a smartphone, you want a full QWERTY keyboard. You also want something small and light that feels like a real phone so that you won't abandon it at the first opportunity. That used to leave you only one option - a BlackBerry. However, the success of RIMs devices has inspired a plethora of competitors, most recently the S620 from HTC, probably the most BlackBerry-like device in terms of styling to date.

The curves of the S620 may look more odd than stylish, but you can tuck it in a pocket and forget you're carrying a Windows Mobile smartphone with a full keyboard and a screen you can see in bright sunlight that's good enough to watch video on.

Unlike the similar Samsung BlackJack which has HSDPA, this is only an EDGE device; the advantage of that is that you get two to three days of battery life rather than a day, although if you turn on Exchange Direct Push email it drops to around 36 hours. It does have Wi-Fi, both b and g, with good range and data speeds, especially for a device this small - you can be over 40 feet from an access point and still get a connection. Wi-Fi will run your battery down but you can set the radio to turn off automatically if you haven't had connectivity for a set time.

You also get a good range of Bluetooth profiles, including headset/hands-free, dial-up networking, serial port, FTP, OBEX and stereo A2DP, and Bluetooth 2.0 should use less battery power.

The mini USB port on the base charges as well as connects to a PC with a standard cable, but it's also where you plug in the headset, so you can't swap the one supplied for a standard 2.5mm headset. A rubber flap keeps out the dirt, but you have to winkle it out every time you plug in, so whether you find it useful or irritating depends on how often you use a cable. The microSD socket is under the battery cover but you don't have to turn the phone off to insert or swap cards.

Although it's small the S620 doesn't feel flimsy and the soft-touch case means it won't slip out of your hands. The gentle curves make it comfortable to grip and the JOGGR touch strip on the right-hand side of the screen means you can scroll holding it one handed; it also replaces the usual up-down volume controls. This is the same surface as a notebook touchpad so you can double-tap, although takes some getting used to. The buttons to go back or open Pocket Outlook are useful, although you have to get used to holding the phone so you don't hit them accidentally and we'd like the option to customise them.

There are shortcut buttons on the keyboard for Pocket Internet Explorer and messaging (which gives you a choice of all your inboxes for email and messages). You can also press and hold the Home button to turn on voice dialling (which gives you voice shortcuts to applications too). There isn't a dedicated camera button; instead you have to hold down Function and press the Symbol key, which is fiddly. Starting up the camera is much slower than turning on a dedicated digital camera, but the shutter release is fast and there's a sport mode that takes three or five shots in quick succession to give you more chance of getting the shot you want. The icon-based interface can be confusing but you can shoot video and even set the white balance and exposure compensation, which is more sophisticated than most camera phones. Quality is reasonable even though it's only a 1.3 megapixel sensor; good enough for basic business images but poor for macro images of business cards or documents.

The voice recorder, memory manager and secure delete utility are useful. As this is Windows Mobile Smartphone rather than the Pocket PC Phone edition you usually get on a QWERTY device, you don't get the Word, Excel and PowerPoint Mobile apps or the Notes option for Pocket Outlook; the ClearVue viewer for Word, Excel, PowerPoint and PDF is included and you can install OneNote Mobile. You don't get auto completion or auto correction either, so you have to put in capital letters and punctuation by hand; this makes typing rather slower and more frustrating, compared to a Pocket PC phone or a BlackBerry, although the keyboard is comfortable, well laid out and easy to type on. Plus you can't copy and paste in email (or any other app).

Most of these disadvantages go away when you upgrade to Windows Mobile 6, and in other ways you may find that less is more. Windows Mobile Smartphone has a simpler, less cluttered user interface and it's more of a phone; you get speed dial, predictive dialling, call history, photo caller ID, supports call waiting, conference calling and flight mode. Plus this is a far smaller, lighter and slimmer device than any Pocket PC Phone. If you want a QWERTY device that's lightweight in every sense, this is it.

A smart, capable, lightweight smartphone with multimedia features good enough to let you keep it in your pocket out of business hours. By the time the Motorola Q finally makes it to the UK, the S620 may have stolen its market.