As the masses continue to queue and camp outside retail stores coast-to-coast for perhaps the most hyped, or even over-hyped, phone launch in history, Apple's iPod-based smartphone finally goes on sale in US stores at 6pm local time today. 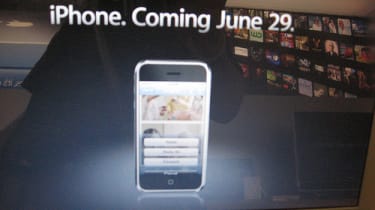 The crowds have been camping for a week to get it, and the media can't shut up about it. Finally, six months after Apple chief executive unveiled the device to the public, the iPhone goes on sale for the first time this evening across the US.

Apple's iPhone hits store shelves at 6pm local time in a retail spectacle that has whipped gadget fans into a frenzy over a device that is built on tried and tested, older mobile phone technology rather than the latest innovations.

The product, which melds a phone, web browser and digital media player, deepens Apple's transformation from a maker of stylish-but-niche computers into a broader consumer electronics powerhouse with interests in audio and video hardware, content, software as well as desktop and mobile computers.

The sleek and shiny iPhone is a gamble by Apple, which is trying to expand the market for the company's software and media services in order to appease record labels, TV and movie companies keen to maximise digital sales of their content. The iPhone also represents another attempt by Apple to tackle the business PDA market, something it hasn't tried since the failed Newton device in the early 90s.

The reputation of Apple boss Steve Jobs as a technology trendsetter rests on whether the iPhone can do for mobile phones what the iPod did for digital music: unify a fractured and confusing market behind a slick, easy-to-use product that users will aspire to own.

"They want to extend the dominance they have in terms of their ability to create really elegant hardware and software integration," said Mark McGuire, an analyst with market research firm Gartner. "This is the next big business unit for them."

However the iPhone is not as adventurous as the marketing hype would suggest. Rather than take a risk by deploying recent technology innovations, or try to tackle supporting the power-hungry 3G UMTS mobile phone system, Apple has built the device out of older tried-and-tested - albeit best of breed - technologies.

"Its core technology platform is relatively conservative for a mid-2007 smartphone. The iPhone lacks some high-end features such as GPS, video capture, 3G support and a replaceable battery" added McGuire.

Apple claims that the iPhone will deliver around eight hours of talk time, six hours of browsing and prolonged data use, seven hours of video playback or 24 hours of audio playback. Good numbers, if it actually measures up to the claimed figures.

Anticipation is running at levels usually reserved for the arrival of rock stars at a signing session or the introduction of a new video game console.

Customers are pitching camp outside Apple and AT&T stores across America, major newspapers and news websites have plastered their front pages with iPhone stories for days, and no tidbit has been too small to report for the galaxy of enthusiastic tech blogs. People are even working a good trade in selling their services as queue position holders, charging upwards of $200 a time to stand in line for you while you get on with your life.

"I just want to be the first one playing with it," said Jose Sanchez, a 22-year-old shoe-store employee lined up outside Apple's US flagship store on New York's Fifth Avenue.

"Apple's accomplishment during a short period of time is impressive. Without having launched a product, Apple is already a premier brand in the extremely competitive handset market" said McGuire.

The phone comes in two versions priced at $499 and $599 (250 and 300) depending on whether you want the 4GB version or the 8GB one. Demand is expected to centre around the larger capacity model, given the iPhone's ability to play video. The purchase of an iPhone in the US requires users to buy into a two-year airtime contract with AT&T, with voice and data plans ranging from $60 to $100 (30 to 50) a month. The iPhone is not available SIM-free, preventing users of rival network T-Mobile USA from buying a handset and putting an existing T-Mobile USA SIM card in it.

Early reviews have been positive about the large touch-sensitive screen and the full-blown web browser, while expressing concern over the quality of AT&T's GSM network, the Apple phone's virtual keyboard and lack of commonplace camera phone features such as picture messaging.

The iPhone is already making itself felt in the industry before even a single unit is sold.

Rival Palm, which makes smartphones running its own Palm OS as well as Microsoft's Windows Mobile said it could post a small loss and lower revenue this quarter due to slow sales and fears that the iPhone could hurt demand for its Treo smartphones.

"It's likely that as people try (the iPhone) out, there may be some stall in our sell-through," Palm Chief Executive Ed Colligan told Reuters on Thursday.

Indeed the six-month build up to the US launch of the iPhone has had an impact on the whole mobile phone market, with many users holding off on purchasing upgrade handsets or entering into lucrative airtime contracts with networks other than AT&T until they had a chance to see and try an iPhone.

Apple looks set to sell significant numbers of phones today, with an overall aim of moving 10 million handsets in the first 18 months of sale. If achieved, this would represent a modest one per cent of global mobile phone sales, suggesting that Apple is downplaying the potential of the iPhone with the aim of producing and more than the target 10 million.

"We're building a fair number of them, but we may not (meet demand)," Jobs told the Wall Street Journal in an interview. "We've taken our best guess, but it wouldn't surprise me at all if it ain't enough."

What's less clear is whether sales will hold up once the initial burst of excitement has waned. Staggering the launch between the US and UK, with the iPhone going on sale in the UK in October, will help maintain momentum in the short term at least.

Apple's shares have risen 30 per cent since Jobs unveiled the phone in January, though the stock has fallen 2.5 per cent over the past five days.

Jobs has expectations of $5 billion in revenue that will be recorded in quarterly increments over two years.

Piper Jaffray said this month Apple could sell 45 million units in 2009, putting the iPhone on par in terms of revenue with its two key businesses, the Mac computer and the iPod, which is expected to see some cannibalisation of sales of lower capacity Nano and Shuffle units in favour of the higher margin iPhone.