Energy Saving Trust report shows each home will spend £200 a year on electricity to power IT. 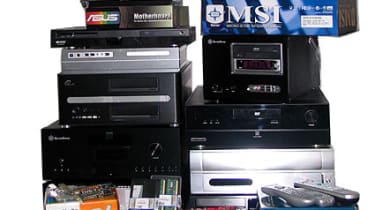 By 2020, personal computers along with communication and entertainment technologies will account for 45 per cent of all electricity used in the home according a report from the Energy Saving Trust.

The report also suggests that we will need as many as 14 average sized power stations to produce the energy needed to keep home IT powered.

The Ampere Strikes Back report points to modern entertainment appliances and electronics for causing the hike in energy use and costs. In 2005, the third most popular activity carried out by people in the UK, aside from sleeping and working, was watching TV/videos/DVDs and listening to music - activities all requiring a growing number of gadgets.

In 1985, only 0.6 per cent of homes owned a mobile phone. In 2004, that number rose to 96 per cent. In 1982 just three per cent of the population owned a computer, compared to 60 per cent in 2004. Current figures also show that the average family home also owns two to three televisions, one to two DVD players, two music systems, one to two MP3 players, three cordless phones and a digital camera, among other things.

However, the report also shows that modern appliances are using more power than conventional ones.

For example, plasma TVs use three times more energy than their conventional counterparts. Digital radios use seven times as much power as traditional analogue ones.

Even PCs in idle mode uses large amounts of energy. PCs lacking a manual 'off' switch are a concern because they can sit idle for longs periods of time doing nothing and still consuming energy to enable restart from a keyboard press or other peripheral. The reports suggest buying laptops which consume, on average, 70 per cent less power than PCs.

"Think about how you are using appliances and turn equipment off when not needed as well as rein in the impulse to hoard equipment that has already been replaced," said Philip Sellwood, chief executive of the Energy Saving Trust. "The average user could save 37 a year by avoiding standby use alone and some of the 2020 energy burden projections could be curbed."