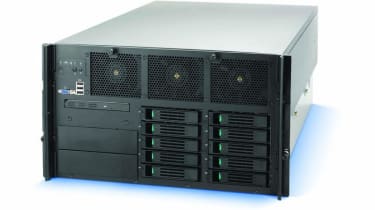 This year sees Evesham Technology moving further into the enterprise server market and the launch of its SilverEDGE 5000HW platforms allow it to add high-performance Xeon MP systems to its portfolio.

Evesham has always been a big fan of Intel so the 5000HW 6U on review is the latter's Server System SR6850 HW4 package. It's aiming these at typical environments demanding a high processing performance such as medium to large mail servers, high-demand SQL applications and render farm environments and also systems consolidation and expansion using virtual servers.

We've watched Intel's white-box solutions gradually getting ever more sophisticated and this system doesn't let the side down as it delivers a healthy combination of processing power, storage capacity and expansion potential. The 6U chassis is extremely well-built but it's certainly no lightweight and it would have been useful for some carrying handles to be fitted such as those found on HP's larger rack servers. The 5000HW puts its height to good use as it provides two cages at the front with room for five 3.5in hard disks apiece. Good design extends inside as with the lid removed you'll find a tidy interior awaits. The Intel SE8501HW4 motherboard occupies most of the internal real estate and has the four Xeon MP sockets mounted at the front where they can take advantage of a bank of six hot-swap cooling fans.

The price includes a full house of 7140M Xeon MP processors which run at 3.4GHz, have an 800MHz FSB and sport a whopping 16MB of L3 cache. However, it's worth noting that the E8501 chipset only supports older 400MHz DDR2 memory and despite a wholesale move by Intel to its Core technology the processors still utilize the older NetBurst architecture and will almost certainly be the last to do so. The first Xeon MP processor to use Core technology will be the quad-core Tigerton which is expected to arrive on the launch-pad very soon. Rated at 150W the Xeon MP isn't very green either. Using a Pro-Elec power meter we saw the server drawing 533W in idle and with SiSoft Sandra pushing the processors to 100 per cent utilisation this peaked at a very uncomfortable 780W.

The motherboard offers a single SATA/150 interface and an embedded LSI Logic dual channel Ultra320 chip with ties in with Intel's embedded RAID controller. However, for high performance applications SAS is fast becoming the interface of choice with SCSI now likely to start fading away as SAS gains acceptance. Fortunately, Intel has addressed this by fitting a SAS backplane to the chassis and teaming it up with an Intel PCI-e RAID controller card.

System memory is implemented on four separate hot-plug modules which mate with the motherboard via dedicated 16X PCI-e slots. Each has four DIMM sockets and this arrangement takes full advantage of the mirroring and memory RAID feature offered by the E8501 chipset. You can designate one bank of memory as a spare and with an even number of modules with identical memory capacities you can implement mirroring. If all four modules are populated with matching memory configurations you can go for the memory RAID feature which creates system memory partitions for full redundancy even in the event of a complete module failure. Each module has status LEDs on the top panel and the power button on each one facilitates hot removal and hot-add.

Typical applications this server is aimed at demand 100 per cent uptime and along with the memory redundancy the 5000HW offers plenty of other fault tolerant features. You get a good choice of PCI-X and PCI-e slots and five of these are the hot-plug variety. Power comes into this equation as well and the price includes a pair of mighty 1570W hot-plug supplies.

HP still holds all the cards for remote server management and monitoring as its integrated iLO2 chip and ProLiant Essentials Foundation Pack software offer an unbeatable partnership. Nevertheless, Intel has been working hard on its act and now bundles its Active System Console and LANDesk System Manager. The former provides a smartly designed web interface with full monitoring of areas such as temperatures, voltages, fan speeds, hard disk space and CPU status. The LANDesk software takes management up a notch as it can monitor multiple servers from a single core server. This allows you to keep an eye on environmental values of all systems from a central location and you can create alerting tasks to warn of any problems. It requires an agent installed on each system but with this in place you can closely monitor performance, collect historical data and maintain detailed hardware inventories.

You also get Intel's remote management module which provides a dedicated network port allowing the server to be remotely controlled irrespective of its condition. Management is via a secure web browser session which provides a tidy interface offering access to functions such as sensor monitoring and power control where you can switch the server off, cycle power or reboot it. Full remote control is provided where you can access the BIOS menu and control the resident OS.

No doubt the biggest competition to the 5000HW comes from HP's ProLiant DL580 G4 where its smaller 4U chassis offers a more modular design that allows the processors and four memory modules to be accessed from the front panel. Storage potential isn't as good as the DL580 supports up to eight lower capacity 2.5in SAS and SATA drives. Furthermore, whereas the 5000HW offers five hot-plug expansion slots as standard the DL580 requires an optional mezzanine card for this. Evesham also scores highly in the value stakes as most of the competition will be hard pushed to deliver such a highly specified Xeon MP server at this low price point.