Using LogMeIn Ignition and a USB stick to connect remotely to a PC.

Want to have access to your files, applications and intranet services without carrying a laptop? We show you how you can do it step-by-step. 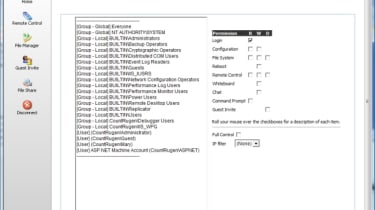 There are plenty of remote control services that let users gain access to their desktop PC from the road, but most of them require you to set up the software on the remote access terminal (a laptop for example) in advance. If users don't travel with a laptop, or need emergency access from someone else's PC, LogMeIn Ignition lets them 'start up' their PC from any other computer by plugging in a USB stick, memory card or even a PDA - anything that you can store the Ignition software on. This launches the remote software without needing to install it, connects to the LogMeIn service and looks up the remote PC and lets the user transfer files or view the desktop. It doesn't save any of that information on the PC used for the connection and once the USB stick is removed the app can't be used any more.

One major advantage of LogMeIn is that there's a completely free version that just does remote control, without separate file transfer, and that works with LogMeIn Ignition. There are also several pay-for versions offering file transfer, file sharing, screen recording, remote diagnosis, group policy control and a tool that will install or remove remote control software from user's PCs, but only remote control, file sharing and file transfer work with LogMeIn Ignition. Using a two-stage SLL-connection via the LogMeIn gateway means that the whole connection is encrypted with public-private key pairs and you can add one-time passwords or SecureID-style tokens for greater security.

Despite that, LogMeIn isn't difficult for an end user to set up or use, and the LogMeIn Ignition software makes it simple for them to use on any machine where they can plug a device into a USB socket. This walkthrough shows you what they'll see on screen and what they need to do at each step.