The technology that brought you the Tour de France

Cycling event the Tour de France is a marvel of modern technology. IT PRO takes a look at the infrastructure behind this year's race and how the technical team enabled the media and crowds to broadcast and communicate. 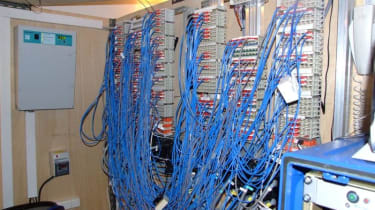 Imagine installing connectivity for an office of over 1600 people from scratch, with everything from ISDN and voice lines to DSL and IP video conferencing. Now imagine doing it over and over again in a new location every day, sometimes in the middle of a city and sometimes on the top of a mountain, using WiMax and satellite connectivity because there isn't an exchange to plug in to.

The Tour de France is an endurance event, for the cyclists - and for the technical team setting up the finishing line for each stage and the telecoms infrastructure to connect the media reporting on the race. Hours before the riders set off each day, Orange's Temporary Solution Team are at work laying cables, positioning aerials and connecting voice, data and video lines. Two thousand people work in the arrival zone; project manager Henri Terreaux-Barjou, calls it "a little city, moving every day".

Making up the city are 100 trucks for TV and other media, three Orange trucks, three helicopters and one plane to relay images of the race in progress to the commentators - and 40 miles of electricity and network cables to connect them together. It takes two hours to set it all up, and two hours to tear it all down. That means the team gets to work as soon as the race finishes and the yellow jersey is awarded; they leave one site at 10pm, get up at 3.30 and start laying out the next day's arrival point at 4am, ready for the journalists to arrive at a leisurely 8am. 50 full-time technicians and 330 local staff per stage work in all weather; some days are baking hot but one year there was snow on the finish line and they had to move 12.5 miles downhill to avoid it.

What they build each day is an entire DSL infrastructure for voice, data and video. 150 SDSL lines run into DSLAMs connected to an ATM backbone; all of it trailing between the three Orange trucks and dozens of other trucks, huts and cabins, so the distribution boxes and cable connections are rugged and waterproof.

Setting up for the Grand Depart in London was one of the easiest stages. Not only is it flat, jokes Terreaux but "The Mall is straight and it has parking". It's also only just wide enough; the road is crammed with trucks and cabins, cables and aerials, and at intervals the Horseguards canter past in full panoply. For some stages the team has to set up on top of a mountain or in a forest. When they can't get both the 35-ton Orange trucks up the mountain or into the forest so they can run the cables between them they use WiMax instead. "We can't run cable across the road if it's in the way of the cyclists," explains Rik Robarts, solution manager for Orange Business Services. The WiMax is used to deliver DSL services over Wi-Fi, reaching 1km between the trucks. It's the distance rather than the bandwidth that needs the WiMax connection; "you have DSL services on the end which can be contended with bursty traffic" says Robarts, so there's no point in using more than 8Mbps between the trucks

There are 300 voice lines at the finish line, 100 for the 400 journalists in the trackside press room and another 100 at the starting line. The rest of the 1,500 lines are at seven intermediary points along the course and with the other 1,200 journalists in the remote press room; in London that's a boat-ride down the river at ExCel, sometimes it's as much as 28 miles away.

Every journalist needs a different mix of voice, ISDN, DSL and Wi-Fi; while there's a strict order to the desks in the mobile press room they have to be set up every day because the order is reversed if they're on the other side of the road. Only 50 radio and TV journalists fit into the interview van so there's an IP video link to the remote press office, which also has its own 8Mb/sec line and a 2Mb/sec line purely for the photographers (they also get one of the six Wi-Fi hotspots for uploading).

Every journalist gets their own phone number which stays the same throughout the Tour, whichever desk they're using that day. Orange can rent out SIMs to journalists on the road and there's a service centre to deal with account problems; they can even recharge mobile phones. If you've ever left your phone charger behind on a business trip, you know how hard it can be to beg, borrow or buy a replacement with the right connector while you're travelling. To avoid a jumble of cables Orange uses AnyFill chargers that take almost any phone battery and recharge it in 15 minutes.

The popularity of the Tour means that where a stage finishes in a town or village that has an exchange, up to 100 volunteers from France Telecom will turn up to patch in connections and lay cables ready to plug in to the trucks when they arrive. For the Grand Depart and the two UK stages, Orange didn't want to connect to BT lines; instead they set up a satellite link. They do the same thing for the Paris-Dakar rally with a 2Mbps link for the whole course; just for the UK it's a 34Mbps satellite link, the first time Orange has used this much satellite bandwidth for a real-time event.

Orange also puts up a 50m mobile phone mast in the technical area, with a base station that can handle up to 240 simultaneous calls, and 400 simultaneous calls on the arrival line, so journalists and spectators alike can get the news out. It's not just French pride at stake here; the Tour is a showcase for Orange's technology and technical ability. WiMax is the best technical solution for connecting the trucks but it's also proof that a commercial service is feasible. "If we can be seen to be leading innovation on the Tour de France, says Robarts, "it's of great benefit to us."

The three 35 ton Orange trucks are the heart of the technical area but they're surrounded by media and event trucks, mobile buildings and press facilities. A spaghetti of cables runs into and between the trucks, an uneven surface the technicians stroll over casually. Of the 40 miles of cables laid every morning and pulled up every night, only six miles are network cables.

The Mall is flat, straight and has plenty of space to park; easy to cable up compared to the stages in France. Even with WiMax there are plenty of cables needed for power, TV and the many companies working behind the scenes so the Temporary Solution team will be plugging things in for years to come.

The heart of the Tour de France network in one of the three Orange trucks. Because every journalist has a number that follows them for the whole tour, but the layout of the technical area and the press box change every day, this whole patch bay will need to be replugged every day.

A cabinet of multiple DSLAMs delivers the 400 ADSL and SDSL lines for the technical area. Apart from the satellite connection, this is the contents of the average telephone exchange, packed into a truck ready to drive off every evening.

For the UK stages the link to the outside world was this 34Mbps satellite connection; the fastest connection ever used for a sporting event like this, it carries all the incoming and outgoing traffic apart from mobile phone calls.

Below: Wi-Fi, WiMax and mobile phone antenna sprout from the roof of a truck behind the press box. There are two Wi-Fi hotspots for the technical area, with a third running as a backup. Everything you see where will be dissembled in the two hours after the last rider arrives and shipped off to Canterbury, Dunkerque, Marseilles, Foix, Cahors or wherever the next stage is, every day for three weeks.

Above: The trucks - and the cables that connect them together - stretch along the 200m length of the technical area. Orange supplies race footage and connectivity to TV trucks like this one. There are more than 1600 staff working in the technical area as well as nearly 400 Orange employees at each stage.

Only a few journalists get a position in the commentator's box at the finish line but each of them needs a different mix of connectivity; voice, ISDN, DSL, Wi-Fi, camera feeds all have to be configured for each desk every day. Even though the order of journalists stays the same, if the box is positioned on the other side of the road the next day they'll be sitting the other way round to keep key journalists closer to the finish line.

Space is so tight in the technical area that the interview studio only holds 50 journalists in person. The others can ask questions and see the winning cyclists over an IP video link from the remote press office - which was down the Thames at ExCel for the London stage. The video goes over the same network and satellite uplink as the rest of the site traffic.

The action isn't just at the finish line; the London stage is less than six miles but some are 186 miles long. Three helicopters with five cameras each follow the race to get the best footage, but they're not always in range of Orange's Tour network, so a relay plane picks up the signal from the helicopters and sends it on to an intermediate satellite station; that relays the images to the finish line. Digital radio links send the footage the last 25 miles to a dish on a crane; the video goes to the production buses for each TV station covering the race and the broadcast video goes out by the satellite uplink or the connection to the local exchange.

Inflatable podiums and signs make it faster to move to the next location. As far as the geography allows, the layout of the technical and press areas is the same every day; easier to lay everything out and easier for press, officials and the technical team to find their way around a cramped and crowded area.

It's not just professional journalists who need to get connected; enthusiastic spectators want to share the excitement and the results with friends, so Orange adds more capacity to the mobile phone network at the finish line as well as in the technical area. And when the race is over for the cyclists it's just the beginning for the Orange team, who spend two hours tearing down the site, ready to start again at dawn.