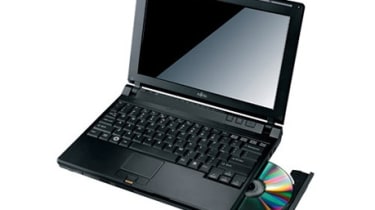 There are very few true ultraportable PCs with an optical drive, and not many with built-in 3G; the diminutive LifeBook includes both, plus a 10.6in widescreen and a full set of ports without adding weight or sacrificing battery life.

The LED backlight on the screen is part of the secret; it uses much less power than a traditional LCD screen that the five hour battery leaves room for a DVD burner. While the optical drive is very useful - and saves you carrying an external drive in your luggage - if you don't need it you can pull it out to save on weight or replace it with a 60 second battery that almost doubles the battery life.

You can squeeze extra life out of the LifeBook by pressing the Eco button on the front; this turns off the DVD drive, card slots, FireWire, Ethernet and Wi-Fi and turns down the screen brightness. You can tweak the settings, including adjusting the screen brightness, but the defaults reduce power usage by nearly a third.

That battery life makes it worth carrying the LifeBook when you wouldn't lug along a larger laptop, and the 1.25kg weight makes this the lightest notebook with an optical drive. Three flavours of Wi-Fi and the built-in HSDPA 3G modem mean you can get connected almost anywhere; this machine is all about portability. For such a small case, the LifeBook has room for more ports than you'd expect; an SD and MemoryStick slot as well as PC Card and FireWire as well as two USB ports (sensibly, one on each side of the case in case of extra-wide connectors). We'd like to see 802.11n and Express Card rather than PC Card, but that would put up a price that's already at the top end of what you'd expect to pay for an ultraportable because of the integrated 3G modem. The SIM card slot is under the battery rather than on the case itself, so this is more convenient for a dedicated SIM than for swapping with your smartphone.

There are other nice touches, like a sliding latch for the PC Card slot rather than an awkward pop-out catch, the clearly labelled on-off slider for the Wi-Fi, the 1.3 megapixel webcam at the top of the lid and the shock sensor that parks the hard drive automatically if the LifeBooks gets a bit too mobile. Twin array microphones make Vista's voice recognition more accurate and improve sound quality if you're recording in OneNote or making a video call. The biometric sensor is welcome as well; although Vista Business doesn't include BitLocker you get SmartCase Logon software for protecting your user account and passwords. You can also use it to scroll up and down. This is a useful idea as the PageUp and PageDn keys need the Function key and the trackpad is very small, has a pronounced texture and doesn't have a built-in scrolling area but the fingerprint scroll is temperamental in use.

It's not just the trackpad; the whole keyboard is small, but the keys are well spaced and unless you have very large hands you won't find yourself mistyping (this entire review was written on the LifeBook with very few typing errors). The extra size you get with a widescreen rather than the standard aspect ratio is just enough to make the difference here. Full-size backspace, return and shift keys and an inverse-T layout for the cursors mean you won't be fumbling and making the case thick enough for the optical drive gives you enough travel on the keys to make it comfortable to type for a reasonable length of time. There's a one quicklaunch button, initially assigned to Vista AutoBackup.

If you find basic black less than stylish you can pay extra for a white case, but that's not really the point here. This is a solid business notebook rather than an entertainment system, although it's up to streaming video and casual gaming. The WXGA resolution means you could watch 720p video but while the screen is clear, bright and colourful the Core Solo processor isn't up to much multimedia. There are stereo speakers - one by each hinge - but the sound isn't impressive. The 60GB hard drive is sized for business apps and documents rather than downloads as well. You'll only notice the lack of saturation on the deepest colours if you're doing a side-by-side comparison but even with the 1GB of RAM you will notice the lack of performance if you're doing more than email, office documents and web browsing. If you're looking for a PC you can take anywhere and work on for hours, the LifeBook P7230 is impressively portable.

Ultraportable PCs have to sacrifice something to get this small. In the case of the LifeBook P7230 the core functions of battery life, drives and networking remain intact. The keyboard is small and the Core Solo processor limits the performance for multimedia but if you can cope with that you get supreme portability.