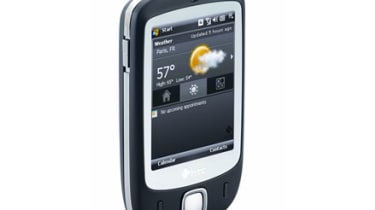 The Apple iPhone certainly isn't the first touch screen phone; Pocket PCs have had touch screens since before they turned into phones. But it is the first Windows-based phone designed for your fingers rather than a stylus, and it has a multi-touch screen that can deal with more than one finger at a time.

The marketing might be positioning the HTC Touch as the Windows Mobile equivalent of the iPhone, but what's really new about the Touch isn't the finger-friendly front screen - it's the fact that it's the first Windows Mobile 6 device to make it to the market.

It's also one of the sleekest Windows Mobile phones yet, with a soft-touch easy-grip matte black surface with metal trim. The case is just larger than the screen, so it fits neatly in your hand, leaving just enough space for the controls.

The Touch has more than the single iPhone button; a power button, a volume slider, a camera button, call and end buttons and a five-way controller for when you can't tap precisely enough. More buttons than you'd expect for a touch screen phone you're going to need them, because the Touch has a split personality. Slide your thumb up the screen and you get the TouchFLO interface; a sleek 3D cube that you can rotate by sliding your thumb across the screen, with panes for entertainment, launching programs and handling contacts. The music button on the entertainment pane takes you to the Audio Manager, a music player with menus and buttons designed to press with your thumb rather than touch with a stylus.

The program launcher has six buttons just the right size for your thumb; the photo thumbnails for your favourite contact are also thumb friendly, with links to the phone dialler, the phone log, the Contacts app and the tool for choosing which contacts you want here. The problem is, that's as far as the TouchFLO interface really goes; press any of those buttons and you're in a Windows Mobile app, designed for the stylus rather than the thumb.

You can scroll with your thumb in apps like Contacts and HTC has done a good job of optimising the touch screen so you can actually type with your thumb on the standard soft keyboard; get your thumb centred on the letter you want and that's what you get. But it's still a painstaking way to type and not as fast as T9 predictive text on a numeric keypad because the feedback is visual not tactile. And while you can usually get the selection you want on a menu first time sometimes you'll have to switch to the five-way controller or pull out the stylus. Windows Mobile is designed for the tip of a stylus, not your fingers.

The touch screen does make the many features in the camera interface more usable. You can adjust the white balance and the exposure compensation, zoom in (although not in the highest resolution) and switch between single shots, triple-exposure sports mode and video; it's the same camera interface as on other HTC models like the Dash but with a touch screen the controls become usable rather than frustrating. The camera itself is still average rather than impressive though, and the fixed focus means you can't take good shots of documents or business cards.

Windows Mobile 6 has welcome business features, including HTML email (with Exchange 2007 or Web mail), vastly improved email search, the ability to create meetings, flag messages for follow-up or create an out of office message plus a ribbon view showing conflicts in the calendar. IT admins will like the security policies for encrypting memory cards and forcing regular password changes. The Touch doesn't yet have support for Office 2007 file formats, although it does have the chart editing tools in Excel and other Office Mobile enhancements.

But without a keyboard you lose one of the most useful new features of Windows Mobile 6 Professional; predictive dialling. On a device with a keyboard or a keypad you can start typing a name or number on the front screen and get a list of matches to call; on the Touch you have to press the call button or switch to contacts first. It's only one more button press - and at least there is a dedicated call button, unlike the iPhone - but it's still one more button press than on a phone with a keyboard.

In fact, it's not really fair to compare the Touch to phones with QWERTY keyboard, or even numeric keypads. This is the evolution of the iPAQ and the iMate JAM, a stylish and lightweight touch screen phone with Windows Mobile 6 that you can use some of the time without pulling out the stylus. It has the Windows Mobile heritage; thousands of applications and push email, rather than the iPhone's online-only Web tools. Like the iPhone it's EDGE and GPRS rather than 3G, not the fastest connection but the battery life is much better than a 3G phone too. A stylish business device, but not an iPhone killer all the way through.

The HTC Touch takes the touch interface two steps forward and one step back, but you also get Windows Mobile 6 and the usual excellent Exchange integration for push email. If you want a slim and sleek touch-only Windows Mobile phone, this is it. If you want an iPhone killer, keep looking.