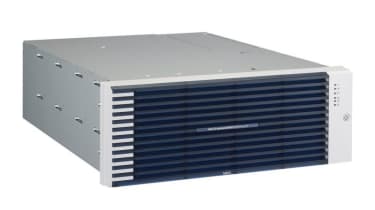 Traditionally fault tolerant server solutions have been aimed primarily at enterprises with deep pockets and a surfeit of floor space in their data centres. NEC's latest Express5800/320Fb-LR bucks the trend as its price tag is firmly on the right side of five figures and its compact chassis delivers a comparatively high rack density.

The 320Fb-LR is one of four new fault tolerant servers from NEC and brings in support for Xeon 5100 dual-core processors. It's aimed specifically at Windows networks and is currently certified only for Windows Server 2003 Enterprise R2 although the price we've shown for the review system doesn't include the OS.

NEC advised us that its next generation of fault tolerant servers will be launched in the UK at the end of this year and it plans to support 64-bit Windows versions and Linux. The server employs a compact 4U rack chassis that houses a pair of hot-plug system modules each with identical specifications allowing all key components to be duplicated. On the review system each module came equipped with a pair of 1.6GHz Xeon 5110 processors partnered by 6GB of DDR2 memory. The chassis incorporates a pair of 700W hot-plug power supplies and in between them are a couple of redundant fan modules as well.

The chassis uses a passive backplane that links the two system modules together and this also provides a centralised connector at the rear with a monitor port plus two USB ports for keyboard and mouse. A key function of the 320Fb-LR is that the modules are not separate systems so do not represent primary and secondary servers. The motherboards incorporate NEC's Gemini Engine chipset which delivers its Lockstep technology. This compares and synchronises both system modules to ensure that instructions are carried out on both during precisely the same clock cycle. If any component fails then Lockstep isolates it allowing the server to continue to function. The system module can then be removed and the faulty component replaced without incurring any downtime. Storage is handled by a separate six-drive hot-swap bay and the hard disks are protected by RAID-1 mirroring and duplexing for each drive.

The system modules are well built with the processors fitted with solid passive heatsinks and accompanied by a triplet of large cooling fans at the front. Each motherboard incorporates a pair of Gigabit Ethernet ports which are used to provide redundant, load balanced network connections. There's room to expand as each motherboard offers three 64-bit PCI-X slots which can support half-height cards. The server provides plenty of visual aids to its operational status. Called ExpressScope, the system modules each sport an LED array with indicators for the processors, memory modules, fans, power supplies, temperatures and voltages making it easy to isolate a fault. The chassis itself also has an LED panel to the right showing general system module and disk operational status and whether the server is running in full fault tolerant mode.

During start-up the nature of Lockstep becomes clearer as the BIOS boot phase showed a standard system with two processors, 6GB of memory and a pair of network ports. This delivers a big cost advantage over clustering solutions is the 320Fb-LR uses a single instance of the OS and installed applications so there are no extra licensing issues. OS installation is aided by NEC's ExpressBuilder utility which is supplied on a bootable CD-ROM. It opens with a single screen asking for the OS product key, administrator password and machine name and allows you to select the system partition size and file format. The utility takes over from here as you just drop in the Windows disc when requested and it'll complete the task with no further intervention.

From Windows, the fault tolerant functions are watched by the GeminiEngine Monitor although it's a tad feeble as all it will do is sound a beeper is a fault is detected. You can also keep an eye on operations from NEC's Server Maintenance utility which shows the status of all components in each system module. This provides a more useful set of tools as you can brings the modules up and down and update their firmware so they match.

For general remote server management you get NEC's ESMPRO utility which fires off a discovery routine that scans the network and lists all SNMP devices. With the ESMPRO agent installed NEC servers can be queried directly from the map for hardware inventory and performance graphs of selected components. Remote web access to the server is also supported and provides access to operational details, inventory and the ESMPRO event viewer. Although not included here, full remote server management is an option as you can fit NEC's optional management card in a dedicated slot which provides a separate Ethernet port for remote access via the strangely named DianaScope utility. It's not particularly sophisticated but does provide access to power settings and VNC based remote control.

To test the LockStep functions we simply pulled an entire system module from the chassis whilst it was being accessed by another system running an FTP download. The GeminiEngine Monitor starting bleating faintly and the Server Maintenance tool showed the module as missing but our FTP transfer continued without pausing for breath. We then replaced the module and returned the server to fault tolerant mode without any interruption to network services. Usefully, the modules are protected from surges during removal and replacement as power will only be applied when the locking screws have been secured.

Business critical applications demand full fault tolerance and NEC's Express5800/320Mb-LR offers a highly cost effective solution. Some of the monitoring and alerting tools are basic but it looks a lot better value than server clustering and some other fault tolerance server solutions and the smart Lockstep technology ensures it doesn't have any single points of failure.

NEC shows that fault tolerant servers can be a more cost-effective solution than clusters. Management features could be more sophisticated but the Express5800/320Fb-LR delivers a good overall specification and costs a lot less than much of the competition.