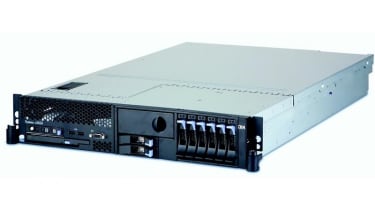 Since launching its Systems agenda last year IBM has delivered some very desirable server products to market that have clearly benefited from a complete redesign. The System x3650 is a prime example as this 2U rack system is endowed with a fine specification along with a number of unique features. It's aimed primarily at data centres with restricted floor space and its biggest competition undoubtedly comes from the ProLiant DL380 G5 which HP claims is the most popular 2U rack server in the world. In this exclusive review we see whether IBM has what it takes to offer a solid alternative.

Server installation gets off to a flying start as you boot the system with the bundled ServerGuide CD-ROM which takes you through hard disk and RAID setup, system partition creation, driver installation and loading your chosen OS. Director is IBM's standard management tool for all its servers, blade servers, workstations and laptops and requires an agent loaded locally for the system to be remotely managed. It can collect and store inventory data on the designated management system and will install its own copy of Apache Derby if an existing database isn't available. Director offers high levels of information about managed systems and uses a simple interface that's split into three panels. The servers are shown in the centre and you can run tasks such as inventory simply by dragging the relevant icon from the right panel and dropping it on the selected server.

Director has gone green as it's capable of running IBM's optional PowerExecutive component which allows power consumption and thermal loads to be remotely controlled. You can closely monitor power consumption on a per server basis and create power domains where power capping will cause all members to have processor performance throttled back in an effort to reduce heat output. Although not included here IBM's optional Remote Supervisor Adapter SlimLine II card provides remote browser access to the server regardless of its status. You can power the server up and down, reset it or remotely control it and monitor critical components. We admit to preferring HP's iLO2 feature as this is embedded in virtually all ProLiant servers and is more sophisticated but it's worth noting that IBM includes remote control whereas with HP it's an extra option.

Server design is good as even though IBM has packed plenty into the front panel there's still room for a large grill to allow an unobstructed air flow through the chassis. IBM matches HP in the storage department as the x3650 also has room for up to eight 2.5in. SFF hard disks. However, whereas the DL380 only supports the smaller SAS and SATA hard disks, the x3650 can handle six high capacity 15K 3.5in drives instead. However, we reckon it's better to take the SFF route as this gives you an extra bay at the front which accepts an internal tape drive - the DL380 doesn't have any facilities for this. The small pop-out panel above the front USB ports shows off IBM's light path diagnostics which provides a matrix of fifteen LEDs for an at-a-glance status display of all critical components.

The x3650 really does look well thought out and lifting the lid reveals some nifty internal design touches. For your money you get a fine pair of 2.66GHz 5355 quad-core Xeons which are located directly behind the front air grill and topped off with meaty passive heatsinks. To get a high memory support IBM has incorporated twelve DIMM sockets split into one group of eight and another group of four further back. Processors and memory are both covered in easily removable plastic ducts and general cooling is handled by no less than ten hot-swap fan modules. With this much air movement through the chassis you'd expect this server to be noisy but it's as quite as a zephyr.

The server offers a good expansion potential as you get a standard butterfly riser card with the review model sporting PCI-e 4X slots on each side. IBM also offers a version with a pair of PCI-X slots and in both cases the right-hand slot can handle a full height, full-length card. Tucked up in the left-hand corner of the motherboard are a couple more PCI-e 4X slots and these accept vertically mounted half-length, half-height cards.

It's clear a lot of thought has gone into chassis design all round. The system came with a pair of hot-plug 835W power supplies which are easily accessible from the rear. The lid is held in place with a single latch, is easily removable and provides good levels of access to internal components. The rack mount guide rails have been improved to allow for easier server fitting and removal and the server also comes with a rear cradle that ensures the cabling is protected when the server is moved.

Compared with equivalent servers from Dell and HP, the x3650 does come out a little on the pricey side and the modest standard RAID features drop value even further. If you want the most hardware for your money then check out Dell's PowerEdge 2950 and HP's ProLiant DL380 G5 but if you want a class act in your rack with the best storage options then the System x3650 should be at the top of your list.

The System x3650 delivers a superb specification and presents it in a very well designed chassis. It offers a high storage capacity, plenty of room to expand and quality remote management features although Dell and HP do offer better value.