IT PRO talked to the chief operating officer of PC maker Lenovo about the company's plans and products, and how she balances the Chinese and American sides of the company. 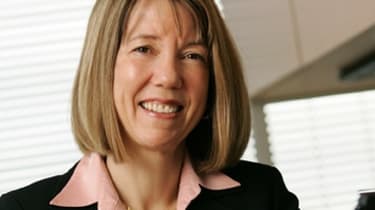 Fifteen years after the very first ThinkPad, two years after it bought the IBM PC division and three years before it loses the rights to use the IBM name, Lenovo is doing well. The company announced a twelvefold jump in profits, from $5 million (2.5 million) a quarter to nearly $67 million (33.5 million) and regained its positions as the number three PC manufacturer in the world - behind HP and Dell - after falling behind Acer the previous quarter. We caught up with the company's chief operating officer Fran O'Sullivan to talk about what's coming next in notebooks and why the mix of cultures is working so well for the company.

You've launched another tablet PC, the X61 with the dual-touch screen. Are all mainstream notebooks eventually going to turn into tablets or is it still really for vertical users? I don't think it will ever replace the notebook but the applications where the tablets are working - in vertical or in education - we could not be happier with our tablet results. I was reading on the plane over that one of our corporate partners said 'Lenovo did not create the tablet category but they did perfect it'. We really have worked hard on the getting the best of long battery, thin and light and a clamshell when you need it to be or switching to a tablet when you need it to be. And it's popular; we have been pretty much chasing demand since we announced it. We've been very successful in verticals, in education. But in general there certain individuals - we have them within Lenovo - who are tablet people. People tend to say either 'we love tablets!' or 'I'll go back to the notebook' but nothing in between. It's black and white, there's no grey.As handwriting recognition and voice recognition get better, does the tablet become a more normal form factor? Will we all start carrying thin and light UMPCs without keyboards? I think our heritage with the Think product is based on usability; listening to feedback and thinking how do we provide tools for making your everyday life easier. I run our usability council and really it is not engineering that limits it today, except maybe a little bit where we need to improve batteries more. The real limits are human limits and what you need for very efficient and long input and output. Voice recognition is getting to be very good technology, handwriting recognition is getting better and better. But for voice recognition you have big security issues - as you do with phones. Over here there is nothing more obnoxious than people talking on their mobile phone and you couldn't do any type of voice email without disturbing everyone.

Kids these days use their thumbs, they SMS the person next to them - they really can't write. Long term, handwriting is not the thing. Today the best tool is still a keyboard - and as you get older you need a larger screen or your eyes get tired after a period of time. For the foreseeable future, when doing heavy computing, you're going to have a large form factor device for your input and output needs. Also, we need to make smaller devices easier to use for inputting because of the advantages - email being pushed is very convenient and instant-on is a big thing. Having long battery life is critical; small and light is fun but not if you only have three hours battery life.What's next for mainstream notebook PCs? What are we going to be seeing in the next Thinkpads? There are two examples of tools we are in the process of rolling out that really show what we're doing form a usability point of view.

The first is battery stretch mode. You're on an airplane, you can't plug in, you have dead time and you want to be able to get your work done so you can relax when you get to your hotel and you notice your battery is going down. With one click you go into battery stretch mode; it goes to the highest power management settings, also it shuts off all USB ports, all the optical devices, we go dimmer on the screen. With all that we've given you an 18 extra minutes to get your work done on the plane and enjoy the evening when you arrive. The other is power presentation mode. People who carry their notebook for a presentation, we want to give them high confidence for doing the presentation. You just bring up the screen on the projector with function f7 and it will automatically start the show, yet your ThinkPad screen is a working computer so you can have your speaker notes showing. Also your IM won't pop up on the screen.How about new hardware developments, what's important? Wireless USB; it's fast, it's got the bandwidth, it's easier and more convenient for customers so I think that's important. More customers are looking for multimedia. In the beginning they thought 'wide screen and DVD? I don't want them watching movies'. There weren't any business applications that needed it. Now there are training programmes and interactive marketing deliverables. So it is critical to consumers and it's moving up through the enterprise.Who's ahead in processors for notebooks? Are you backing Intel or AMD or looking at other suppliers like VIA for really low-power devices? This has been our core strategy from when we created the ThinkPad; we are always looking at potential partners out there. We have products with Intel, products with AMD; we provide our customers with what they want, where they want it. Especially in the notebook space we really need lower power consumption. We're getting to a point where performance is really outstanding from a speed point of view, and moving to dual core. Now we need innovations to be able to get that into very lower consumptions. There's our environmental strategy, we want to have green products, but it also allows us to go into much smaller form factors.Do you expect 3G integrated in notebooks to become ubiquitous, or will the data costs hold it back? In Europe we are going to see much faster 3G wireless WAN. Wouldn't it be convenient for users to be able to connect with 3G wherever they are from their system? Part of this solution needs to be a full business model; from notebooks through to carriers, it has to be affordable or people will never adopt it.

We are working on flat rates within the US. If you stay at a hotel you pay a fairly high amount to connect per night to the high bandwidth network; the cost of broadband for several nights in a hotel will pay for your monthly flat rate.

You've kept the IBM brand, but have you been able to capitalise on Chinese strengths like close ties to resellers and supply chain efficiencies? Part of the globalisation we've done within Lenovo - we call it our innovation triangle - involves having three legs to the business. We have one leg in North Carolina and out of that we have leadership and software, our peripherals team and overall marketing for notebooks. The second leg of triangle is in Japan where we create all the R&D for the ThinkPad and the third leg is Beijing where we have real expertise on our desktop systems. We do servers, we do printers, we do mobile there.

We took the efficient Chinese supply chain and added quality management from IBM and we've come up with a win- win situation. We have improved our bottom line return, improved serviceability from the supply chain, improved our customer satisfaction and we have improved the quality. The area we want to tackle next is the ThinkVantage technology. There are some software consumer tools on the Chinese side that I want to bring in so we can have a common kernel for the enterprise and consumer customer.

Are there products and technologies from China and Japan that we haven't had in the West, that you are planning to launch globally? When you see a new technology, it's good to test pilot it in one area and see if this is going to be the next big hit. They came out with cameras in the phone and I though why in the world would you do that? Initially it was just a bunch of teenage girls and the thought was it will never catch on. That's a good example of something that started in Japan and did go worldwide. We're still in that pilot stage. We're not assuming that what is successful in China will be successful in the rest of the world.

Mature markets do have differences. There are some apps that will definitely fit and some of the trendy designs will be very popular. But we're still in the 'working it out phase'.