Microsoft's landmark OS nears its teenage years as it celebrates the 12th anniversary since its launch on 24 August 1995. 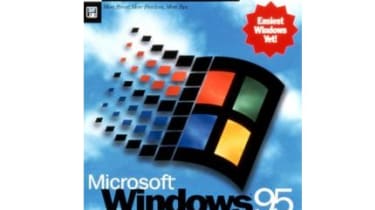 Windows 95 is heading for the turbulent journey that comes with being a teenager as it celebrates its 12th birthday today.

Back on 24 August 1995, Microsoft officially took the wraps of its latest brainchild - the 32-bit successor of Windows 3.1, Windows for Workgroups and MS-DOS.

A commercial plugging Microsoft's innovation was launched featuring The Rolling Stones' song 'Start me up.' Friends favourites Jennifer Aniston and Matthew Perry were also asked to hop on the promotional bandwagon and took part on a 30 minute video, dubbed 'cyber sitcom.'

The fanfare continued when the company announced, two months after the official launch, that the new OS had sold millions of copies. A year later, it boasted sales of 40 million units.

Although the OS is no longer officially supported by Microsoft, some consumers and businesses, particularly smaller players, are still merrily using it to meet their computing needs.

"Windows 95 has been much anticipated and much has been written about it. But fundamentally, it is about unlocking more of the potential of computing," Bill Gates, Microsoft's chairman said in a statement about the launch. "We are moving into the next era of computing, which includes broader communications via email and the online world, dazzling multimedia and games, and richer educational software."

"Windows 95 helps open up this new world. It makes computing easier and more fun, and will empower people and businesses to do more with computers than has previously been possible."

Since Windows 95's birth, the software giant has released a handful of successors, most recently Windows Vista, which has been likened to the former in terms of how significant it will be for users and the industry alike.

"These new products announced today are the most advanced work that Microsoft has ever done, and I believe they signal the beginning of a new wave of innovation that will have an even more profound impact during the next decade."