New touchscreen can be used from both the front and back of the device. 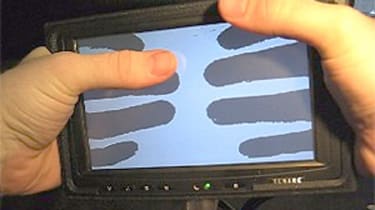 Researchers working at Microsoft have devised a new touchscreen device that can be operated from both the front and the rear of the screen.

The device aims to overcome the conventional touchscreen flaw of the hand covering-up much of what is being displayed. Microsoft's existing prototype, called LucidTouch, allows users to view the front screen without obstruction by entering text, navigating maps and clicking links from the back.

Beginning with a commercial touchscreen, the researchers at Microsoft bolted a multi-input touchpad to the back and then fitted a webcam on a boom to record the motion of the user's fingers. This video is then fed into software running on the PC which filters out everything except the fingers, adds pointers to the fingertips so that users can select items precisely on screen and then feeds it back to the display.

To keep users orientated a transparent view of their fingers appears on the screen to indicate where they are pointing. "The main concept behind LucidTouch is pseudo-transparency - the ability to see your hands as they interact with the back of the device," says Microsoft researcher, Patrick Baudisch. "This visual control allows users to control their interactions and manipulate objects on screen with precision, rather than poking around in the dark."

"In addition, it features multi-touch," Baudisch adds. "While holding the device between palms, users can operate the device with eight fingers from the back and with both thumbs from the front."

As a next step Microsoft researchers envisage a more compact prototype in which the touchpad provides the image of the fingers without need of the clumsy webcam and boom. One suggestion involves a series of light sensors which could map the movement of the fingers, while another involves tuning the capacitors in the pad itself to detect the electrical field of the fingers.

"I can see LucidTouch changing the way users interact with PDAs and tablet computers, such as Microsoft TabletPC," says Baudisch. "In addition, I think LucidTouch will also offer substantial benefit for very small devices. Think of a smart wrist watch featuring a touchscreen. If you used your finger on that touchscreen your fingers would occlude the entire display. Using Lucidtouch, you would instead move your finger over the back of the wrist band, yet the translucent overlay would map your finger motion onto the screen."

Click here to see a video of LucidTouch in action