IFA 2007: Accessories are the future of laptop business says Toshiba 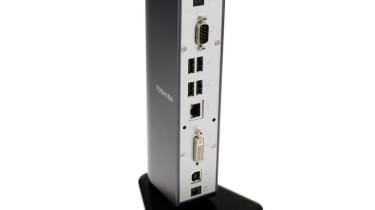 Toshiba chose the IFA consumer electronics show in Berlin this week to showcase its latest innovations around storage, docking and casing.

The line-up of external storage, docking stations, protective carrying cases and other PC accessories announced is more than a set of optional extras, according to the company's general manager Marco Perino. It's a strategy he refers to as "the future success of this business" for supplementing the configuration of low-end notebooks.

"I'm not just pushing this for Toshiba; I'd like to see us have €150 notebooks and consumers buy the extras they want rather than having to pay more initially. The statistics say you only use 20 per cent of a notebook but you pay for 100 per cent."

This includes what Perino calls the world's first slimline HD DVD-writer and a €299 HD DVD Super Multi drive, both measuring 128mm by 126mm by 12.7mm and weighing in at 165g. The 320GB external hard drive which has a freefall sensor that can park the drive head in nine milliseconds if the drive is dropped is also lightweight.

The rugged hard drives (in sizes from 160GB to 300GB) are a little heavier but they also have a fingerprint sensor to protect data; you can register fingerprints for several different users via a software utility.

Instead of producing ruggedised notebooks which would be larger, heavier and pricier than current models, the new EasyGuard range of carrying cases is designed for users who only need to protect their PCs in transit.

Toshiba is still testing the EasyGuard bags and can't say whether they will be rated for a one or two metre drop but Perino was confident enough to hurl a notebook several feet across the room onto a marble floor at the launch.

It connects all the ports to a notebook via a single USB 2.0 port and the VGA version is priced from €129. There is still no launch date for the UWB wireless dock for the R400 previewed at CES in January, because the EU UWB specification is still a draft version.

On the multimedia side, Toshiba is introducing the 7" Tekbright digital photo frame, with an LED backlit LCD and 800 x 480 resolution for €119. The new Camileo Pro is a €179 7 megapixel video and digital camera that also plays MP3s and ebooks and works as a webcam.

Finally, although full details won't be available until October, Perino also promised "the smallest HD hard drive-based camcorder in the world" as part of a forthcoming range of Gigashot HD camcorders with features like 10x optical zoom.