Tape vs Disc - the new battle

The debate about whether tape storage can compete with a disk-only back-up solution is as hot as ever. We talk to two senior pros to find where they stand on the debate as they battle with information overload in two very different sectors. 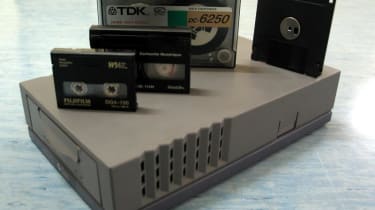 As organisations of all sorts, in the public and private sectors, struggle with growing amounts of data, much of which must be backed-up safely by law, the issue of what constitutes a secure but also economic back up strategy remains at the forefront of many IT professionals' minds.

Here we talk to two senior IT professionals in two different sectors about the role of tape and disk in the enterprise.

Warwick District Council employs 20 people in its IT department, serving over 600 users, 400 of them on its main site and the rest in small, local offices.

"We've always used HP for both servers and storage," says Bates. "We made a move to networked storage five years ago with the StorageWorks MSA1000. We decided to centralise our back up onto tape at the same time. We realised that that was the way to go and moved onto an EVA 3000 array with Fibre Channel connectivity."

At the time, the authority's data storage needs were expanding hugely, says Bates, making this move not simply desirable but essential.

"We were no longer allowing users to save stuff onto their desktop, so all data was going onto our central server - for security reasons mainly," he says. "The number of photos and large documents we were storing was just growing and growing - especially once we got a document management project started which meant we were storing an image of all the post we received. The databases in use with the various departments just seemed to keep growing too."

Bates realised it was time to review his back-up strategy again when the back up window stretched all night: "It was often still going in the morning when everyone turned up for work, slowing the network down no end," he says.

Another hardware upgrade followed: "We got an EVA 5000, and kept the EVA 3000 to replicate everything on to and give us a degree of disaster recovery capability," says Bates. "We then moved the MSA1000 to a staging job in the back up process, shifting data from disk to tape."

He says the core of his back-up process is now replication between the two SAN arrays, but still backed by tape: "It's just so reliable, it's cheap, and it means I can easily take back-up data and store it off site," he says. "I keep hearing about people who've moved the back up function entirely onto disk, but I can't see any reason to. Getting rid of tape is just not an option for me at the moment. In the future? I really can't say. I'm sure we'll be using tape for a few years yet. You just feel more secure with tape. Disks do crash, don't they?"

He says future plans include moving one of the SANs to a remote office and connecting it over a wide area link: "It's obviously something that would be technically feasible right now, but it would be expensive," he says. "Although I can't justify this move at present, technology might well move on and make it possible in the future."

With no remote site in operation at present, Bates says he always has to look at what might go wrong with data and plan accordingly: "At the moment, we could lose a floor to, say, a flood, and be OK, but losing the whole building would be a true disaster."

Another possible move for the future is to virtualise all servers, he says, perhaps adopting blade technology: "Blades look good to me, or at least the HP ones I've seen. We're looking into it at the moment."

CMC Markets was established in 1989 as a foreign exchange market maker, and is now a global leader in online trading. It provides tailored online trading solutions for banks, brokers and financial intermediaries worldwide.

"I sat down last week with our senior infrastructure guy, and he asked me 'Is it time to move back up totally on to disk?'," says Gawthorpe. "It's a key question. We store eight or nine terabytes of data every time we do a back up, using BakBone software to manage the process, and I wouldn't call us a big organisation. We've got to keep that data safe for seven years."

Although there is now a good cost argument for disk over tape, Gawthorpe says the debate has to extend well beyond simply cost and take in practicality as well. "There's no way one disk is going to hold all that data," he says. "And if you're going to have two locations for disaster recovery purposes, that means you've got to have two lots of machines. It's just not as simple as saying I'll use this disk and replace that tape. They just aren't the same thing."

Each location must be an environment suited to housing a disk array, he says, unlike with tape where the back up location need be no more than a good, clean environment with some dust-free shelving. "Tape just sits there until I need it," he says. "It's not a machine that needs to be looked after, while giving off heat and noise. I've restored data from tape that's been there for over seven years - no problem. It's time consuming, but possible. And you can reuse the media."

Although increasingly perceived as yesterday's technology, tape technology is still developing, he says. "It certainly hasn't stood still, as tape vendors realise they need to keep up. They're not just waiting for the axe. With the huge capacities that today's tape media can hold, that's a lot of disk capacity to buy instead. It's not just about capacities though. With today's tape you can get throughput of 250Mb/sec, which is phenomenal. At the very least, it's similar to what you achieve with disk."

He says he does not anticipate a major rush to replace tape within the next few years. "I've heard rumours that there's a few organisations doing this, but I don't know of any specific examples. I've been in this game a long time, and just don't see this move happening anytime soon."

He sees tape and disk coexisting for a long while yet, with neither able to eclipse the other's key strengths. A more important debate, he says, is arguably the choice of software used to manage the process: "BakBone is the best I've used - easy and intuitive. When I come in it reports a successful back-up process, and that's all I care about."