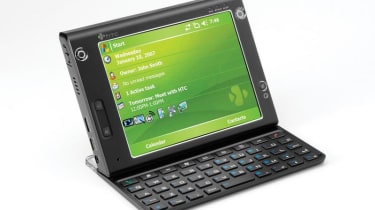 Like the iPhone, HTC's Advantage is a large-screen device designed for web browsing as well as making phone calls. Unlike the iPhone, it comes with a full range of ports, connections and applications - and a keyboard.

It's not a UMPC because it runs Windows Mobile rather than a desktop release of Windows or Linux, but with a VGA port, 8GB micro drive, built in GPS, a USB port that you can connect standard peripherals to (with an adapter), 3 megapixel camera, video conferencing support as well as true 3G connectivity it's a lot more than just a smartphone. It's also a lot bigger.

Now it comes with Windows Mobile 6, is that enough to make you want to make room for this kind of intermediate device?

You can use the Advantage like a traditional PDA or like a mini laptop because the QWERTY keyboard attaches magnetically; pull it off and you can rotate the screen and use the stylus, hold it about an inch away from the screen and the magnet pulls it into the right place and turns the device on. The leather case has clips for the screen but again the keyboard attaches magnetically and pulls into position when you open the case. If you don't use the case, the magnet also turns the keyboard into a screen cover for the Advantage. A transparent section turns the screen into a line of icons for power, signal, unread messages and so on - you can even change what you see with the volume slider.

The keyboard has an excellent layout, although the function keys for numbers and punctuation could be easier to see. You don't get much motion when you press a key so you'll have to learn to watch the screen instead of trusting your fingers - but if you're doing a lot of typing you could use a full-size portable Bluetooth keyboard and treat the magnetic keyboard as a stand. There's a miniature joystick and an OK button on the main screen, two soft buttons on the keyboard and several dedicated app launching buttons on both, if you don't get on well with a touch screen and the rather tiny clear stylus. Alternatively, the VueFLO accelerometer lets you tilt the screen forward and back to scroll through long Web pages. It's a little fiddly at first and doesn't work with all applications, but it means you can scroll smoothly rather than jumping from link to link.

The large screen is one of the highlights of the Advantage; it's bright enough to use outdoors and you can switch from landscape to portrait to suit the application you're running. Although the screen is very clear and photos look good, few apps take advantage of the VGA resolution. If you find the low resolution of Windows Mobile frustrating you can install a utility like the free MVrTrueVGA which quadruples the resolution, although this doesn't render all settings screens correctly.

Having this much screen makes you want more powerful programs and the 8GB micro drive gives you more than enough space to install apps, meaning you can save the miniSD slot for transferring files and media. The micro drive is fast enough to play music and video from and there's no lag in launching applications. The new versions of Word, Excel and PowerPoint work very well on the large screen, especially if you're creating charts or tables and tabbed browsing in Opera makes good use of the space. This is the only device that makes HTC's powerful camera interface feel usable (and images are fair to good in quality for still images and good for video conferencing). We tested the GPS using CoPilot 7 and maps are ideal on this size of screen; the speakers make navigation instructions clearly audible, the large on-screen buttons make it easy to use in the car and you're getting the equivalent of a dedicated navigation device in a smartphone that can do a lot more.

The Windows interface would be too complex to use on this size of screen, but it is big enough to make you want more power and more features in your applications than a smaller smartphone. If this size of device proves popular, we expect to see more software that can take advantage of it.

The size means that it's not really practical to hold the Advantage up to your ear and make calls, but use the wired headset, a Bluetooth headset or the speakerphone plus voice dialling and it makes as good a phone as any other Windows Mobile device - good quality sound and your full address book to hand.

The Advantage doesn't fit neatly into any one category. It's is a similar size to portable video players like the Archos 605 WIFI - but with the A2DP Bluetooth headphone profile as well as a standard headphone jack it has more audio options and you can use it for presentations, productivity apps, making phone calls and surfing over 3G as well as entertainment and wireless Web browsing. You could do most of this on a smaller smartphone, but the beauty of the Advantage is the large screen and excellent keyboard. You could buy a laptop for the unsubsidised price of the Advantage: you wouldn't get something this small with this much battery life (over eight hours of solid use or five hours of phone calls, up to three days of occasional use including push email) but you could run real Windows applications. Intel is promising ultraportable Linux devices this size but they won't be on the market for some time and there's already a full range of Windows Mobile applications.

With improved email and much more powerful Mobile Office applications in Windows Mobile 6 and new software like the satellite navigation software CoPilot 7, you can get real work done almost anywhere on the Advantage. Add a Bluetooth keyboard and you don't have to have tiny fingers. But you're paying a high price for portability that not everyone needs.

Too big to be a smartphone, too Windows Mobile-based to be an ultraportable, but the wealth of features and connections make the Advantage a powerful portable device for getting some real work done on the road - though at a price.