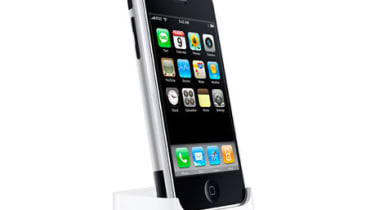 The iPhone has finally arrived in the UK, but what is all the fuss about?

IT PRO is in the process of conducting a thorough review of a genuine UK iPhone running on O2, but in the meantime, we used an opportunity to play with a US iPhone running on AT&T to give you some insight into what you can expect from Apple's smartphone.

First up is the user interface, which is very different from Apple's previous iPod devices or from other touch screen PDAs currently on the market. It is an icon-driven interface, which probably compares more to Palm OS than Windows Mobile, but with a smooth and slick animated fade-in/fade-out loading and closing operation for applications. Also worth noting is that the iPhone does not use a stylus, the interface is built around large icons and on-screen buttons to allow for finger control. With that in mind, the touch screen is covered with optical grade glass rather than plastic, which is actually less susceptible to scratching than plastic.

The iPhone combines iPod audio and video playback functionality with a phone, two mega pixel camera, basic PDA functions and a handful of additional applications. We were pleasantly surprised to see that there are no games on the iPhone, and iPod games cannot be legitimately installed at this time.

The iPhone uses the GPRS-based Edge data system, rather than faster 3G. This is not a bad thing. Edge is pretty quick (I have been using an Edge-based Sidekick device for a year and can confirm that loading times are far faster than normal GPRS, but probably twice as slow as a good 3G connection), and is more than enough to sustain the iPhone's email client, web browser and other internet-reliant applications.

The mail client, along with the text messaging capability really push the limits of a touch screen device. However, the layout is clear, support for IMAP as well as POP3 email means it can interact comfortably with business mail servers as well as consumer mail services, and the on-screen keyboard works extremely well, despite the lack of a tactile keyboard experience.

A mixture of error correction and keys that enlarge as you press them keeps unforced typing errors to a minimum, and even my manly hands cope well, even through the iPhone is extremely narrow (61mm). BlackBerry users will find that migrating to the iPhone and its onscreen keyboard is not that traumatic.

For us, the strongest feature of the iPhone is its web browser. A useful by-product of using a striped-down build of Mac OS for the phone's operating system has allowed Apple's software engineers to shoehorn a full desktop version of the Safari web browser onto the phone, rather than have them develop a bespoke and less powerful mobile browser.

With a full mobile browser on-board, the phone can access normal web pages, and display them in their original form - the same way they would look on a desktop or laptop computer - rather than reformatting the page for a small display. Desktop browsing on a mobile device is again nothing new - various Symbian-based phones have been offering the same feature for some time now, while third party mobile browsers such as the one from Opera can also display a web page in its desktop form.

The difference with Safari on the iPhone is that it is faster than any Symbian device we have used, and compatibility with pages is higher. Pretty much anything that works with Safari on a Mac-based desktop or laptop will load and display quite happily on the iPhone. Simply tapping on the area you want to read causes the display to zoom in on that area and re-render the display to improve the on-screen clarity of the text and images. The page can also be dragged around the screen using a pressed finger, like moving a piece of paper around a desk.

The block on installing third party applications has, for the moment, put a block on adding additional browser plug-ins and add-on applications, but this is likely to change with the launch of a developer toolkit for the device.

Going to the phone, and call quality is good, and call management straightforward. Free-dialling using the on-screen keypad is simple and largely error-free, despite the lack of tactile feedback, while the integration with the address book is easy to access and allows for one-click dialling. The Address Book also lets you insert an image for a contact (as does the Mac OS desktop address book, which will transfer across to the iPhone), with the image popping up on screen when a known contact calls you.

Other applications pre-installed on the iPhone include a Google Maps client (which works extremely well, using a two-finger pinch motion on the screen to zoom in and out of a map), a YouTube client (again, very slick and provides a very easy way to navigate content on YouTube, but it is just as well that iPhone price plans come with unlimited data use) and of course the iPod functionality.

We won't dwell too long on the iPod side of the iPhone, but suffice to say the iPhone's audio and video playback functionality is completely different from a traditional iPod, with the circular click wheel interface gone and replaced with a commonplace left-to-right scrolling bar showing time elapsed and time remaining.

The big change is Coverflow, which has now been deployed as a general file and folder interface within Apple's new Leopard operating system. Again, using a finger dragging movement, users can literally flip through their albums. It is a very intuitive interface and is surprisingly easy to find and stop on the item you are looking for.

Video playback benefits from a widescreen display, and the ability to switch from portrait to landscape display simply by turning the device on its side (a tilt switch inside the iPhone detects movement and repositions the screen as needed.

In all, the iPhone appears to be a very good first attempt at a smartphone from Apple, and for that reason we are happy to give it six stars. Our full review will, however, give a clear view of what an iPhone is like to live with for more than a couple of days.

Ahead of getting our hands on a genuine UK iPhone running on O2, we went stateside to have a brief look at a US model running on AT&T. On first impressions, Apple has struck gold, pulling together a compelling mix of easy-to-use applications and functionality, coupled with a touch screen interface and display that cannot be matched by anything currently on the market.