Network performance may not be a strong point but Plasmon's latest UDO appliances make light work of compliant archiving, are simple to deploy and have a far lower environmental impact than costly hard disk arrays for long term storage. 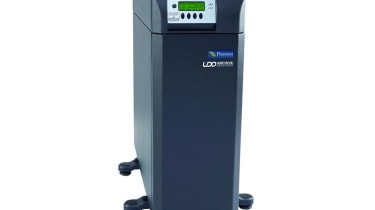 With its UDO Archive Appliance (UAA) optical storage supremo Plasmon is targeting standards compliant data archiving but is now playing the green card as well. Quite rightly as it believes businesses can't continue to store archived data on expensive and power hungry disk arrays as even though the bulk of it will probably never be reused it will be a utility drain for its entire life. Carbon footprints are a hot topic and in the drive towards reducing the drain on their utility bill many businesses are looking beyond the obvious culprits.

The UAA family offers a wide range of systems that incorporate the latest UDO2 optical drives and the AA32 model on review represents the entry point with an on-line storage capacity of 2TB. However, before we delve deeper into the appliance let's take a closer look at UDO technology. Back in 2004 we ran an exclusive review of the first UDO-1 drive in our sister title PC Pro and weren't overly impressed as it had compatibility issues with Windows and performance wasn't great. In 2007 we ran another exclusive review in PC Pro of the second generation UDO-2 drive and concluded that the many improvements made it a good choice for long term data archiving.

UDO-2 may be similar to Blu-Ray in many ways but the latter is a consumer technology and is not suited to data archiving. The UDO-2 drive mechanics have a much higher duty cycle than Blu-Ray drives and the media is protected inside solid cartridges. Three media types are available - standard rewritable, WORM and compliant WORM. The latter works with applications managing archiving and data life cycles and supports a shredding API call function. Standard WORM will be the main choice for this appliance and Plasmon calls the media True WORM as it uses a different molecular structure to rewritable media that causes permanent crystalline dots to be created in the substrate by the laser.

The appliance is a sturdy, well built structure incorporating internal controller boards fore and aft, a pair of SCSI UDO60 internal drives, 32 media slots and solid vertical changer robotics incorporating a bar code reader. At the front you have a backlit LCD panel and a manual control keypad whilst a single Gigabit Ethernet port is at the rear. The front controller manages the drives and the robotics whilst a motherboard at the rear handles the Linux OS and provides physical storage in the shape of a pair of 250GB Hitachi DeskStar SATA drives.

Plasmon's modus operandi is very simple as the controller presents the RAID-1 mirrored cache to the network as simple shares which can be accessed over CIFS/SMB, NFS or FTP. Any data to be archived is sent to the relevant share after which the system automatically migrates it to UDO media and will either leave it on the hard disks or remove as dictated by the user settings. Any application that can access network shares can use the appliance making it particularly versatile.

Installation is a cinch as you just plug the appliance in, connect it to the network and access it via its web browser interface. With DHCP on the case we had it up and running inside five minutes. The management interface is simple enough to navigate and you'll start at the Storage menu where you set up RAID for the hard disks and then carve it up into volumes. Unfortunately, the system takes its storage cut so we were left with less than 180GB to play with. Two types of volumes are supported where standard ones merely exist in cache.

Archive-enabled volumes also exist in cache but the data is subsequently migrated to UDO media dependant on the volume's settings. Usefully, you can stop changes being made to cached data by making it read only or by applying a write commit period in seconds, minutes or hours after which the file is closed to further modifications.

Multiple copies of cached data can be made and you can decide on an initial size for a volume and expand it later. For migration to occur you specify the amount of time a file must remain unchanged, a wait time that holds back migration if new files are added to the volume inside this period plus a minimum number of files and storage size criteria. User access can be strictly controlled with a local database or the appliance can use domain authentication and query an LDAP server. You can limit what each user is allowed to do by determining administrative rights for each share and apply storage quotas to them as well. For each share black and white lists can also be used which contain hostnames or IP addresses of those systems specifically allowed or denied access.

With the appliance rigged up to our Gigabit network we conducted testing using Windows Server 2003 and 2008 RC0 servers. With our test volumes configured for CIFS and FTP access we had no problems accessing them and mapping them as network shares. From here on you can use pretty much any archiving application you like as long as it supports mapped drives. Clearly, the appliance isn't going to match FC SANs for performance and we saw our CIFS file copies and restores returning averages of around 11MB/sec. FTP performance was also in the same ball park with Get and Put operations returning 11-12MB/sec. Archiving operations ran smoothly with our test files shifted onto WORM media to our specifications. To check power consumption we placed an in-line power meter on the appliance and saw it drawing around 140W. To compare this we put the meter on a dual Xeon 5160 storage server with eight high performance SAS hard disks and watched it settle at an energy sapping 440W - enough said, really.

General performance for the appliance may not be particularly good but this isn't such as issue with data archiving. The key features to focus on here are compliance, data integrity, ease of use and long term power consumption and in these areas the UDO Archive Appliance scores highly.

Network performance may not be a strong point but Plasmon's latest UDO appliances make light work of compliant archiving, are simple to deploy and have a far lower environmental impact than costly hard disk arrays for long term storage.