The software giant has hit back at allegations that it is abusing its dominant market position. 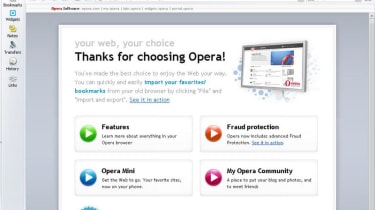 Microsoft has defended claims that it is abusing its market leadership position by tying Internet Explorer (IE) to its Window operating system (OS).

Last week, Norwegian company Opera lodged a complaint with the European Commission (EC) alleging that the Redmond giant is exploiting its market dominance by bundling the browser with its OS.

Opera is also calling for the EC to order Microsoft to support open web standards in IE in future.

Microsoft has responded to the allegations made in the filing in the form of a statement. "It's important to note that computer users have complete freedom of choice to use and set as default any browser they wish, including Opera, and PC manufacturers can also preinstall any browser as the default on any Windows machine they sell," it says.

"Microsoft is committed to ensuring that freedom through our Windows Principles. Internet Explorer has been an integral part of the Windows operating system for over a decade and supports a wide range of web standards. We will of course cooperate with any inquiries into these issues, but we believe the inclusion of the browser into the operating system benefits consumers, and that consumers and PC manufacturers already are free to choose to use any browsers they wish."

Opera's antitrust manoeuvre, which calls for the unbundling of IE or the pre-installation of alternative browsers and secondly the use of open web standards, is aimed at ensuring users have a genuine choice when it comes to which web browser they use, according to Opera, whose chief technology officer (CTO), Hkon Wium Lie, has also posted an open letter to the web community on the company blog.

"We are filing this complaint on behalf of all consumers who are tired of having a monopolist make choices for them," said Jon von Tetzchner, Opera's chief executive. "In addition to promoting the free choice of individual consumers, we are a champion of open web standards and cross-platform innovation. We cannot rest until we've brought fair and equitable options to consumers worldwide."

The European Committee for Interoperable Systems (ECIS), of which Opera is a member alongside other industry giants including Adobe, IBM, Nokia, Oracle, Red Hat and Sun, has also come out in support of Opera's claims.