The recent LeWeb 3 2007 Conference in Paris was the fourth annual attempt to bring the buzz, community and experience of Silicon Valley to Europe. While there may have been a significant number of contributors to the panels from the US West Coast, the diverse range of companies and attendees from across Europe shows that internet development is alive and well on both sides of the Atlantic. 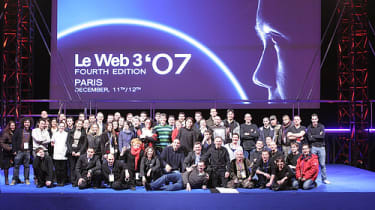 On almost every count, LeWeb 2007 was a success; and this can be put down to the backlash from attendees at last year's LeWeb - at the last minute the event organiser altered the program to bring contributions to the stage from the French Presidential Candidates and former Israeli President Shimon Perez. This upset a hall full of the most switched on communicators involved with the internet and a very public, very vitriolic debate ensued.

At every stage while planning LeWeb 2007, everything has been online for discussion (such as the scouting of the venue, the choice of panels and speakers, even down to where the evening events would be). For example, one change made because of feedback was in providing the internet access to delegates - previously this has been in the sponsor's package, but not this year. Purchased commercially from Swisscom, there were some hiccups on the first morning, but it remained available (albeit slightly slower) for the rest of the conference. For 2000 delegates streaming video, blogging, and uploading at a ferocious rate, the infrastructure stood up well.

This two-way communication between the delegates and organisers is also a good template for modern businesses using the internet. More companies are doing the development in the open, for everyone to seem, comment on, and provide feedback. While this goes against the conventional wisdom, services using this approach are gaining prominence much earlier in their development cycle, providing much needed consumer interest.

Web 2.0 inside a company

That approach is not one that can be undertaken lightly, and in many areas it would be impractical from a regulatory point of view, but the culture of openness that Web 2.0 provides a number of lessons that enterprise could use to good effect.

Rather than try to harness the power of the entire internet, every corporate company has a huge resource already familiar with the company - their staff. They have an interest in ensuring the company succeeds, and by providing an avenue for all to contribute and influence projects staff can feel valued and the company can

The starting point is commonly a Wiki. Where company polices and rules were once the domain of dusty folders, having a version available over the corporate intranet, where all staff can comment on it, and suggest changes, would help lift the team spirit in any company.

However, it doesn't need to stop there, although it's a great starting point. All the communication tools of Web 2.0 have been designed to allow communication to flow in two directions, and to start a conversation for the benefit of all. While the legal department might have a huge number of headaches with a chief executive blogging to the world, there would be less problems if the blog was restricted to a corporate intranet, providing a direct link from management to the staff on the ground, and everywhere in between.

A strong spirit of entrepreneurship drives Silicon Valley, and the triumvirate of managers, investors and ideas required to create that is growing in Europe. Venture capital funds are starting to reach out and move away from the comfort zone of looking for companies with an already proven revenue model that is generating income, towards companies that still in their early stages. Investor Saul Klein started Seed Camp this summer, where fledgling companies went through workshops and seminars on how to do business, with the eventual winners receiving investment in their ideas - and three of the companies from that initiative were on stage at LeWeb.

In the same way that the Seed Camp initiative has helped foster new start-ups in Britain and given the whole system a shot in the arm, so LeWeb is acting as an incubator to give Europe that same guidance and direction. It's noticeable that the European speakers are becoming more prominent every year, and the ideas are starting to look grander and more accomplished. Finnish based Dopplr (a social network for Business travellers) looks to be on track to be the European darling of Web 2.0 in 2008, and they announced their network had left an invite-only period of operation to fully open to whoever wants to join. This again reinforces the idea of public testing and high visibility while a company grows.

Probably the one thing lacking in Europe is willingness for people to become the managers and executives at a company. Silicon Valley thinks nothing of serial chief executives, who investors look to bring into companies to get them on the right road. There's a certain stigma to Europe to people with a long list of jobs, and I think that this is probably the last key to making a truly strong fabric in the old world.

The role of the enterprise

Enterprise is not sexy. At one point from the stage, developers of enterprise software were asked to raise their hands, and there were only a smattering of developers from some 2000 delegates (and interestingly the numbers were about the same as people who remembered using Usenet). The product launches that were on the main stage focussed on search, media and social networks, yet enterprise tools were being used by everyone at LeWeb. The number of Blackberrys and push email solutions in the hall provided a simple visual clue, yet when you look at the tools people were using, CMS systems to power blogs and non-publishing empires; massive amounts of audio and visual media uploaded to banks to server

Enterprise development has given the internet a huge amount of infrastructure and knowledge. Here at LeWeb there were clear signs on how the fabric of Web 2.0 is ready to reward business and enterprise with tools and knowledge to leverage large numbers of people, to help collaboration both internally and externally to a company; to use technology to make both internal and external communication cheaper and easier, and provide the ability to share and work on the same documents while hundreds of miles apart.