Is the iPhone fit for business? Part two

Although the iPhone is aimed squarely at consumers, we all know many corporate devices come to favour through the back door, so why should the latest member of Apple's family be any different? 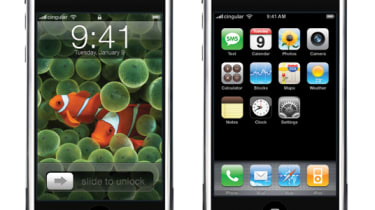 People have started to call me on the iPhone. Although the unlock/answer call feature is not conducive to British weather, i.e. the cold. Due to the touch screen, a gloved hand is useless as the screen only responds to the touch of human skin.

Inside or in clement weather, the slide to unlock/answer feature is pretty slinky. My BlackBerry calls people while it's in my bag all the time and usually at ungodly hours of the night when people are at their least tolerant, which isn't the best way to make friends and influence people at work, not least the boss. The iPhone's multi touch technology eradicates such concerns.

At a recent event to celebrate the 15th anniversary of the short message service (SMS), Kevin Wood, chief executive of Airwide Solutions, highlighted that the "two certainties about the billions of mobile subscribers worldwide today is that they can make calls and text people." That's especially so in the business world, where users aren't as swayed by fancy cameras, music players and the like. Call functionality, SMS, web browsing and application support are key.

Apple goes to the top of the class when it comes to some of the calling aspects of the phone, particularly with respect to its visual voicemail innovation. However, having wielded my iPhone in both Essex and London, the adequate reception I received could be improved on.

Moving on from signal strength, the ease at which you can use the touch screen to make and receive calls (with the caveat of gloved digits) speaks for itself, while the ability to listen to voicemail as .amr files and fast forward to the 'good bits' is a must have for the average business user who listens to messages almost as much as they're on the phone itself.

Rather than one voicemail icon, wooing you to dial a three digit number to see how many messages you have, the visual interface is a brilliant time saver. Business users can quickly and easily run through their messages in between meetings without hampering productivity, with a quick and easy option to return the message leaver's call or delete the message.

The iPhone's speakers deliver high quality sound and worked perfectly for a conference call where I had to dial in two additional participants. Without having to read a complex instruction manual, I quickly and easily put the first caller on hold while I dialled the other number and, at the press of a button, all calls were merged into one. I can see this aspect being a key plus for business users looking to start blurring the lines between their newly-purchased consumer device and the world of work.

Texts are easily stored, logger by user in message threads making it a doddle to find what you're looking for. Although Apple has let users down when it comes to the small keyboard available for text input. The svelte nature of the keypad is likely to cause problems for anyone with a bit of meat on their bones.

At 5.1" with almost child-like hands, even my dexterity was questionable and I hit the right letters first time on a ratio of about 1:3. I can therefore empathise with others who may be frustrated at the input mechanism offered by Jobs et al in this first generation device, although the inbuilt dictionary, which offers both corrective and predictive options, does its best to remedy the situation.

One can only hope that future versions will replicate some of the goodness from the browser keyboard (which can be tilted into landscape to provide a more amply-spaced input method thanks to the iPhone's accelerometer), when it comes to messaging.

I was also bit disappointed to discover that I couldn't send a text to multiple recipients as I had assumed this would be a given. MMS is also a no-show and, while businesses' won't necessarily lament its disappearance, Apple is likely to receive another black mark from consumers for omitting this feature.

For those hoping to use their newly-purchased consumer device as a business tool, they might find this functionality - or lack of it - a problem if they're used to being able to send information to multiple recipients via a single text. Granted, Apple has not aimed the iPhone at the corporate world, but surely consumers - the device's key demographic - also make use of this type of functionality? Think how many group texts you've sent to arrange weekend pub gatherings, birthday, Christmas and New Year celebrations for example?

Given my last experience with touch sensitive technology was the Chocolate, the screen of which often got all hot and bothered when I was using it and proceeded to cut me off mid-call, Apple has come up with the goods to avoid the same problems. The iPhone proximity sensor knows when it's near your ear and powers down slightly, preventing you from being interrupted mid flow and thus ensuring you can continue gossiping with friends/closing that all important business deal without interruption.

Similarly, the device's ambient light sensor adjusts its brightness settings to the appropriate level for your surroundings, offering yet another power saving tool for users.

Given I've mainly used the phone for calling, texting and web browsing, battery life has been better than average, which is something business users would have front of mind when choosing a device. I already have the latest video iPod Nano so haven't been using the phone to play music, meaning those intending on heavily making use of the iPod and video features of the iPhone would also need to consider how much additional battery life this type of usage would consume.

Although camera functionality isn't the main concern for corporate users when it comes to selecting a smart phone, it does come into play at some level for many. The iPhone's two mega pixel camera performs its role as a "camera phone" but is certainly not proficient as a digital camera. Picture quality is what you'd expect from a phone and the device is distinctly lacking in camera functionality (aperture, flash, focus, zoom etc) in comparison to some of its contemporaries, such as the D800, K800i, N95 and Viewty.

Given Apple's large fan base of hardcore graphics workers, this is somewhat of a let down. I expected more. Although that being said, the ability to 'pinch' photos to zoom in and out and scroll through pictures as if you're flicking through a notebook is pretty neat.

Video playback quality is very good, due largely to the generous screen display. However, my biggest bugbear when it comes to the iPhone, and one I had completely overlooked until I finally had the device in my hands, is the fact that it doesn't currently have video capture capabilities.

As a journalist out and about the majority of the working week covering events that are often interview or product led, the ability to have an all-in-one device with video-capture functionality would have been a big plus.

Alas, for the time being corporate users will have to rely on a secondary device for such requirements, whether that is a digital camera or one of the new breeds of high-spec camera phones on the market.