IBM delivers a very well built and nicely designed Opteron rack server. Remote management features are in abundance, storage and memory expansion potential is particularly good and it isn't a power hog either. 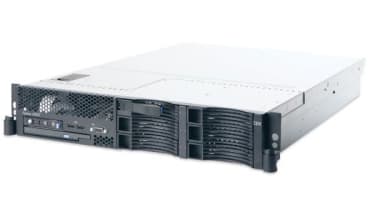 IBM has always maintained a reasonable profile in the AMD club with its System xSeries servers and the latest System x3655 continues with the tradition. This well built 2U chassis comes equipped with a pair of dual-core Opteron processors partnered by a good all round specification for the price. We had hoped to see AMD's latest quad-core Opterons in residence but at the time of review there were rumours of supply issues for this particular processor.

The x3655 is aimed at a wide range of environments with businesses looking to deploy memory hungry applications as a high priority. The review system came with the base 2GB of memory but with sixteen DIMMs sockets in total there's room to expand up to 64GB. Storage choices also look good as the system came supplied with a triplet of 74GB SAS drives and the hot-swap drive cage has room for up to six 3.5in. hard disks. The smaller SFF drives are a possibility as well as you can opt for the version with an eight bay hot-swap cage instead. We reckon these are a better bet for a couple of reasons. Firstly, they consume less power and generate less heat making them a greener alternative but the smaller drive cage leaves enough room for a spare 5.25in. bay above enabling a SATA or SCSI tape drive to be added. You can actually do this with the 3.5in. server model but it'll cost you two disk drive bays.

For essential system cooling the front panel has a large grill to provide a clear air path through the system. Internally, you have ten hot-swap fans grouped in pairs across the width of the chassis. You'd expect noise levels to be high but you'd be wrong as once the fans have settled down after power up overall noise levels are surprisingly low. Power fault tolerance is on the agenda as the review system came with both hot-plug power supplies. We liked the newly designed rear cradle that comes as standard, is attached at the back and used to protect the cabling when the server is slid forward in the rack.

The lid is easily removed and what lies beneath is a very tidy interior that's designed to offer easy access to all components. The two 1.8GHz Opterons are covered with large passive heatsinks and the fans are positioned to ensure they get their fair share of the flow. Each processor is accompanied by a bank of twelve DIMM sockets so there's plenty of room to expand in the memory department and these are covered with a plastic shroud to improve cooling. General SAS options abound as the motherboard sports a pair of embedded SAS multi-lane connectors with one cabled to the hard disk backplane and the other ready and waiting to be linked to the rear panel via the optional cable and mounting plate.

The x3655 is clearly a quiet customer but power usage is also a big concern in data centres and the Opterons in the review system are the HE models with a maximum rating of 68W. To test general consumption we linked the server up to our in-line power meter and with the server fired up with Windows Server 2003 R2 and running in idle we saw it pulling around 240W. Using SiSoft Sandra we increased processor utilisation up to above 95 per cent and saw this increase modestly to 270W. IBM's basic RAID offering isn't particularly exciting as you get an embedded ServeRAID 8k-l controller with a 32MB cache module. However, you can add an upgrade pack which brings RAID-5 and -6 arrays, more cache memory and the battery backup pack into play. General expansion potential is reasonable as you have a choice of three low-profile PCI-Express slots, which are located next to the riser cage.

As the server wasn't supplied with a preinstalled OS it gave us a chance to try out IBM's ServerGuide CD-ROM. This is a handy tool as you boot the server with it and run through menus for hard disk and RAID setup, system partition creation, driver installation and loading your chosen OS. The Director software suite is IBM's weapon of choice for managing all its servers, blade servers, workstations and laptops, which all need a local agent loaded for remote access.

The Director console interface is split into three panels with the servers and other managed devices shown in the centre. Tasks such as inventory can be run by dragging the relevant icon from the right panel and dropping it on the selected server. It offers plenty of operational information about servers with event actions plans providing good alerting facilities and you can add the optional PowerExecutive component, which allows power consumption and thermal loads to be remotely controlled. It provides details on power consumption for each server and power domains use power capping to cause all members to have processor performance throttled back in an effort to reduce heat output.

The price also includes IBM's Remote Supervisor Adapter SlimLine II card, which fits into the riser expansion cage and offers remote browser access to the server as long as power is available. It gives you full control over power settings, remote control and links to the system health, status and error logs. Note that most HP ProLiant servers now come with an embedded iLO2 chip as standard and although we reckon its web interface is more sophisticated it's worth noting that IBM includes remote control whereas with HP it's an extra option.

As far as design goes we like the x3655, although HP's ProLiant DL385 is still a favourite as it's just that little bit classier and has better standard RAID features. Even so, IBM is offering particularly good value with a well specified AMD rack server that has plenty of room to grow with demand.

IBM delivers a very well built and nicely designed Opteron rack server. Remote management features are in abundance, storage and memory expansion potential is particularly good and it isn't a power hog either.