RIM adds extra radios in the form of either GPS or Wi-Fi (but not both) to the businesslike Curve and manages to make them more useful without losing the trademark excellent battery life. 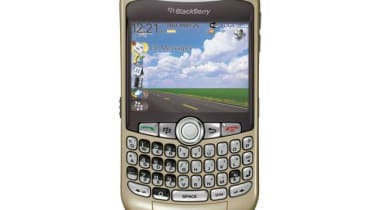 If you want to know the differences are between RIM's BlackBerry Curve 8310 and 8320 models then you'll struggle to tell just by looking. At first glance they are identical but the 8320 has Wi-Fi and the 8310 has GPS. If you want both though, you're out of luck. The similarities though mean that we can look at both handsets in one hit.

Each features the full QWERTY keyboard, trackball, camera and memory card slot of the original Curve; they're both in the same lightweight but chunky case, and neither looks as stylish as the sleek Pearl; but by the same token they're not as slab like as the 8820.

The design of the Curve 8300 enabled RIM to fit in a full size QWERTY keyboard and provide enough space for a large enough battery to deliver the excellent longevity BlackBerry users are accustomed to, while still producing something small enough to carry everywhere with you. Adding an extra radio for GPS or Wi-Fi on these devices means even more options but has RIM managed to keep the impressive battery life as well?

The GPS equipped 8310 comes with RIM's own basic Maps application. As on previous models, this can take an exceptionally long time to acquire a GPS fix - even if you've just been using GPS with another tool. You get free maps and directions, from or to your location, an address you type in or an address from your contacts, but you can't search for a business or point of interest. You can send location details or - particularly usefully - directions by email, text or straight to another BlackBerry with RIM's PIN messaging service.

Different operators also have their own navigation offerings for the 8310; Vodafone's is from Telmap and costs 4.99 per month. You need to download the application, which takes several minutes, and acquiring a satellite fix takes quite a while as well; over a minute in several cases. The 8310 had no difficulty getting a fix inside a car at least. The interface is designed to be simple and sometimes it's rather too simple, offering the equivalent of a dialog box with no options - you need to press the menu button and then choose Yes or No, OK or Cancel. Maps and Points of Interest download over the air when you search for a place or request a route; again this takes some time. For drivers there's a spoken notification when the route is ready and the app goes straight into turn-by-turn directions. The route overview is a map although you can get a list of turns; again, designed for drivers rather than passengers and zooming into the map means another download to wait for. You get spoken warnings for turns one mile, a quarter of a mile or 500 yards ahead depending on the distance between junctions, but the instructions are just the direction of the turn, not the name of the road. If you're watching the screen, red bars at the side of the screen count down to the next turn. You do get street names if you choose walking modes, but this is a sequence of static maps that you have to page through (and the numbers marked on screen may work on a phone with a numeric keypad but they do nothing on a BlackBerry). There's also a low-contrast night mode and the main screen shows the direction you're travelling in. The POI search is reasonable but does best with distinctive names; the application suggests you only need to type a few letters but this means 'pet' finds petrol stations not pet shops.

Overall, this is a reasonable GPS application and it should get you where you need to go. It doesn't have the sophistication of smartphone navigation software like CoPilot (which is due out for BlackBerry soon) or TeleNav's BlackBerry software, (which comes on the T-Mobile 8310), but the monthly subscription is fair value. If you do choose to upgrade, the 8310 is powerful enough to run navigation software well and the GPS receiver works well (in applications other than BlackBerry Maps).

The other good news is that using the GPS doesn't rob you blind of battery power for receiving emails and making phone calls.

Starting from a full charge and navigating in an urban environment for 90 minutes (including ten minutes in a building that blocked the GPS signal) only ran the battery down to 85 per cent. RIM seems to be managing the GPS radio as aggressively as it manages EDGE; if you don't get a satellite signal in a reasonable amount of time the 8310 stops trying rather than ramping up the radio and running down the battery. That's frustrating if you're trying to navigate in a difficult location, but the best choice for a multi-function device.

And 85 per cent doesn't mean you need to rush off for a recharge either. We beat RIM's claimed four hours of talk time by nearly an hour. Assuming you're not on the phone for five hours you can expect to go three or four days between charges without using the GPS and if you're not navigating every day you should still get two days of email on your travels. The Curve is already an all-round performer and adding GPS to the 8310 adds a useful extra string to its bow.

Wi-Fi what-for The dark grey finish on our review sample 8310 looks sleeker and somehow less plastic than the light silver of the 8320; the only other way to tell them apart is that the legend next to the mute button on the top of the case reads WI-FI rather than GPS on the 8320.

Adding Wi-Fi to the 8320 should give you VoIP calls and free browsing but how well this works is up to your mobile operator. The ideal would be VoIP calls over any Wi-Fi connection switching to standard voice calls seamlessly when you get out of range, and the necessary UMA technology is present, but that would mean less voice revenue for the operators. If you get the 8320 from Orange, you can only make seamless calls over an Orange broadband connection at home (the Orange Unique service). Alternatives like EQO, Jajah and iSkoot give you cheap calls by running a VoIP call in the cloud and phoning your number; it's nice to have the option but it's needlessly complicated and there's minimal advantage to using Wi-Fi for this as the phone radio has to be on anyway. You can run GTalk on the 8320 but that only gives you IM, not calls and we weren't able to get the Gizmo5 service working at all. The sensible alternative for the enterprise is to use RIM's own BlackBerry WLAN solution with your IP-PBX; that way users will get free VoIP calls and PBX features like mailbox access and conference calling too. If you're not planning to invest in a solution that will specifically support BlackBerry devices for VoIP, the 8320 is much less exciting than it ought to be - the service matters more than the hardware here. It's not really worth using Wi-Fi to download email because the efficient compression of RIM's push email system means that most messages download speedily enough, even without 3G. Pages do download over Wi-Fi more quickly than over EDGE, but there's not as much of a difference as you might expect.

That leaves browsing. You can connect to pretty much any 802.11b or g hotspot; we had no problems with WPA, WPA 2 and pay-for hotspots (if you need to sign in on a Web site rather than with the BlackBerry utility, turn off your mobile network and load any bookmark to be redirected as on a PC). The Wi-Fi utility scans for available networks but you can fill in network details manually if you're not broadcasting an SSID.

Using Wi-Fi cuts down the battery life more than GPS if you're loading Web sites, but just being connected to a hotspot doesn't have much impact; after a couple of hours surfing you'll be down to 85 per cent battery so much the same as using GPS. That means about an hour of daily surfing on Wi-Fi reduces the Curve's four day battery life to two days. Again, RIM's experience in power management makes a difference here, although this may be the reason why the Wi-Fi connection occasionally disconnected without warning (though we were always able to reconnect immediately). Other online applications didn't always work over Wi-Fi, like the Facebook application Orange includes on the 8310 - and the data connection over Wi-Fi doesn't have the same level of security as the usual wireless connection.

Pick a radio, any radio

If you like the design of the Curve 8300, you'll like the design of either model. You're getting a full QWERTY keyboard and trackball, a bright and clear screen that adjusts to ambient lighting, built-in spell checking and the best multimedia options RIM has managed (a simple media player, a two megapixel camera that doesn't record video, a microSD slot and a 3.5mm headphone socket). Both models have Bluetooth, so if you want both Wi-Fi and GPS you can pair the 8320 with a Bluetooth GPS receiver; if you're going to do that, look for something better than the BlackBerry Maps application. Without UMA, GPS in the 8310 is probably more useful than Wi-Fi in the 8320. If you're holding out for a model with both, wait for a mobile operator to come up with a plan that makes Wi-Fi worthwhile.

RIM adds extra radios in the form of either GPS or Wi-Fi (but not both) to the businesslike Curve and manages to make them more useful without losing the trademark excellent battery life. Without UMA arrangements from the mobile operators though, Wi-Fi in the 8320 only gives you faster Web browsing so the 8310 is our pick of the two.