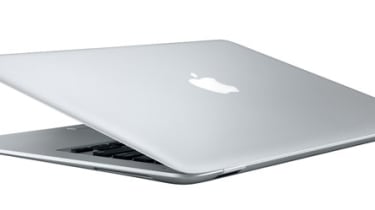 What the standard spec gives is only average performance. Our sister title PC Pro benchmarked the Air, using its custom benchmark suite, under Windows Vista, installed using the supplied Boot Camp software. It obtained a score of 0.69 - faster than ultra portables such as the Sony TZ series and Toshiba Portege R500, but a long way behind a regular MacBook, or MacBook Pro. It also felt a little sluggish in use and for anything but light work, you might start to notice.

Even more of a concern though will be the battery life. Apple claims five hours, but in real world use, with Wi-Fi enabled or a HSDPA USB modem plugged in, I got nowhere near that - and subjectively speaking, after a few days use, I found it was closer to three hours. Significantly, like an iPod, the battery is sealed in, giving no scope for swapping out on the road.

The MacBook Air then is more for the pose warrior, than the road warrior. If you can rely on not being too far away from a power socket, such as in business class, then you'll be fine, though it did get rather warm on the left, when plugged in after prolonged use.

The MacBook Air then is as you would expect from Apple a fine achievement in many respects and often wonderful to use, but its flaws are myriad and as such it's limited to a niche audience.

On the downside, it's paucity of connections, specifically the single USB port and lack of integrated HSDPA mean that's it's a missed opportunity for serious use on the road.

On the positive side though, its weight, its high impact style and the quick start nature and slickness of MacOS X, will still make the Air a highly appealing business tool for some. It will certainly appear in corporate settings, even if the likely route will be via executive charge cards rather than being issued by the IT department.

As stylish a notebook as you could hope for, but in its quest for thinness, Apple has sacrificed a lot. It's lovely to use in many respects but one can't help feeling that the Air is a triumph of style over practicality.