Fujitsu Siemens has been busy with its blade server as the BX600 S3 delivers plenty of new features including some unique quad-core Opteron server blade configurations and all offered at a very competitive price. 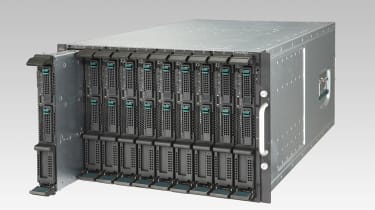 Fujitsu Siemens is something of a pioneer in the blade server market having been in this particular game almost as long as HP. We were impressed with its Primergy BX600 S2 when we reviewed it in 2006 as part of our blade server group test and the latest BX600 S3 builds on these successes and delivers more than a few interesting new features.

Originally introduced in 2004, the sturdy chassis still stands at 7U and has room for up to ten server blades but its internals see a significant redesign. The dual mid-plane of the S2 has now been uprated in the S3 to cater for a greater number of network connectivity options and the demands of the new 10-Gigabit Ethernet end-to-end options. The new BX620 S4 Intel server blade has six Gigabit Ethernet ports whilst the AMD-based BX630 S2 offers a total of four. Essentially, each blade can have half its network ports routed to one mid-plane with the rest going to the second mid-plane.

To facilitate these extra connections the older 16-port Gigabit switch blades have been replaced with a new model that has thirty internal ports presented as twelve external ports. To use all the network ports on each blade you'll need to install two switch blades, which will each link to separate mid-planes. The lower switch blade slots have a dual purpose as they can be populated with fibre channel blades manufactured by Brocade with each offering six 4Gbps FC ports. To use these you will also need to fit a mezzanine card on each server blade.

Fujitsu Siemens is also amongst the first to support AMD's new quad-core Opteron processors but its implementation here makes it quite unique. The BX630 S2 server blade offers two sockets and can accommodate either Opteron DP or MP processors. The latter brings some interesting scalability options into play. Take a pair of these Opteron MP blades and you can bolt them together and, using the slots in the casings, insert two bridge boards that link the blade's HyperTransport buses together.

Another sideband connector links the blades system boards together so all I/O can be routed through them both. It'll take up two chassis slots but you now have a 16-core Opteron server blade, enabling the system to deliver up to 480 cores in an industry standard 42U rack cabinet.

Storage issues have also been resolved as on the older AMD blades two drive bays had to be removed to enable them to be joined together. This is no longer the case so both of the 2.5in SFF hot-swap bays on each blade can still be used.

Remote management gets a boost with the new iRMC (integrated remote management controller) and although only currently available on the AMD server blades, support on Intel blades will follow shortly. The iRMC overcomes issues with earlier blade servers as previously you needed the management blade with KVM support for full console redirect services and this limited you to one session on one blade at a time.

The IBP (intelligent blade panel) is another newcomer, which enables multiple Gigabit ports to be consolidated into single high-speed trunks. Server blades can be assigned to these trunks and failover is supported where it will switch over to a standby trunk in the event of a failure. Essentially, the IBP is Fujitsu Siemens' answer to HP's virtual connect modules.

The chassis supports up to four 2100W hot-swap power supplies with the base model equipped with two preinstalled. General cooling is handled by two mighty radial fans, while connectivity options can be spread across four expansion slots. Along with the new switch blades, the S3 is also 10-Gigabit ready as a dual-port expansion module is present. This requires a mezzanine card installed on each server blade but this does also include a hardware iSCSI initiator and a TOE (TCP offload engine) making it well suited to high performance storage applications.

Unlike Dell, which only includes one management blade with its solution, Fujitsu Siemens supplies both as standard. Each come with a Fast Ethernet port, providing remote web browser management for the chassis, switch blades and server blades. Fujitsu Siemens has also improved its remote management features as the blades provide high levels of access to the chassis, whilst the switch blades offer separate web browser interfaces.

The management blade interface opens with a complete status report on all installed components and environmental values such as fan speeds and temperature. It has a useful Explorer style menu tree to the side making it easy to select and view the status of all individual components and control power to the chassis and individual server blades.

The ServerView S2 Java utility handles all general chassis and blade management and can access any system running the appropriate SNMP agent. There's plenty of information on tap so you can keep a close eye on areas such as processors, temperatures, voltages and fans and tie in alarms or errors to notifications by email, network messages or pagers. The ASR (automatic server restart) tool could prove handy as it enables you to set thresholds on temperatures and force a server shutdown if these reach critical values.

CSS (customer self service) is a new feature, enabling you to highlight a failed component, while ServerView S2 will advise whether you can replace it yourself or if you need to call an engineer in.

As one of the big four blade server vendors Fujitsu Siemens has kept up the pressure by updating its blade server with a range of new and innovative features. HP's c-Class BladeSystem is still our favourite for a number of good reasons but the PRIMERGY BX600 S3 is moving up to a close second and scores particularly well on value.

Fujitsu Siemens has been busy with its blade server as the BX600 S3 delivers plenty of new features including some unique quad-core Opteron server blade configurations and all offered at a very competitive price.