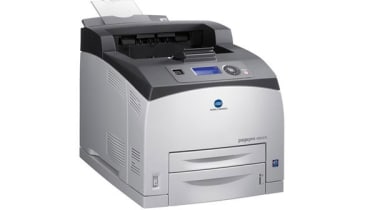 Software consists of Konica Minolta's PageScope suite, which includes net control, peer-to-peer printing, direct print and a status monitor, as well as drivers for both PCL 6 and PostScript Level 3. The drivers support separate cover and separator pages, as well as the usual array of page imposition, overlays and watermarks.

The printer is claimed to deliver pages at 'up to 34ppm', though we failed to get more than 17ppm from the machine. It's quite typical for normal print speeds to be around half the rated values - as nearly all printer manufacturers quote draft speeds to get higher numbers - but even when we switched to economy mode, Konica Minolta's draft equivalent, we still only saw around 19ppm. It's hard to believe you'll get anywhere near 34ppm in normal office use.

Printing a photographic image did produce a first page out in around 10 seconds, which is very close to the rated first-page-out time. The image was well reproduced for a mono laser, with only slight banding in background areas of the photo - nothing unacceptable. General image detail was good at the printer's higher 1,200dpi resolution; it defaults to 600dpi for day-to-day output.

Using the machine to print text and business graphics produced high-quality pages with crisp, dark characters, even at small point sizes and well-engineered greyscale tints. Print quality is certainly well up to typical, internal departmental standards and would be fine for customer reports or documentation, as well.

TCO figures should be low; as already explained, the combined drum and toner cartridges last for either 10,000 pages or 18,000 pages, depending on rating. The only other part is a 140 maintenance kit, which is needed every 200,000 prints. For many companies, this will lie outside the service life of the printer.

At web prices, the 18,000-page cartridge costs around 135, giving a cost per page of 0.81p, plus paper. This is a good figure, in comparison with many of the PagePro's competitors.

Overall, the PagePro 4650EN is a very serviceable workgroup laser, but with a few rough edges and a couple of missing components, in comparison with rival models it's up against. HP's LaserJet P3005x, for example, includes a duplexer and three paper trays, at a very similar price to the PagePro and Lexmark's E450dn has a similar spec, but with duplex print and a 100 lower price tag.

A robust, workgroup laser printer, with twin paper trays and multiple connections as standard, but no duplexer or direct print - both are options. Print speed isn't up to manufacturer's claims but print quality is good and maintenance is straightforward.